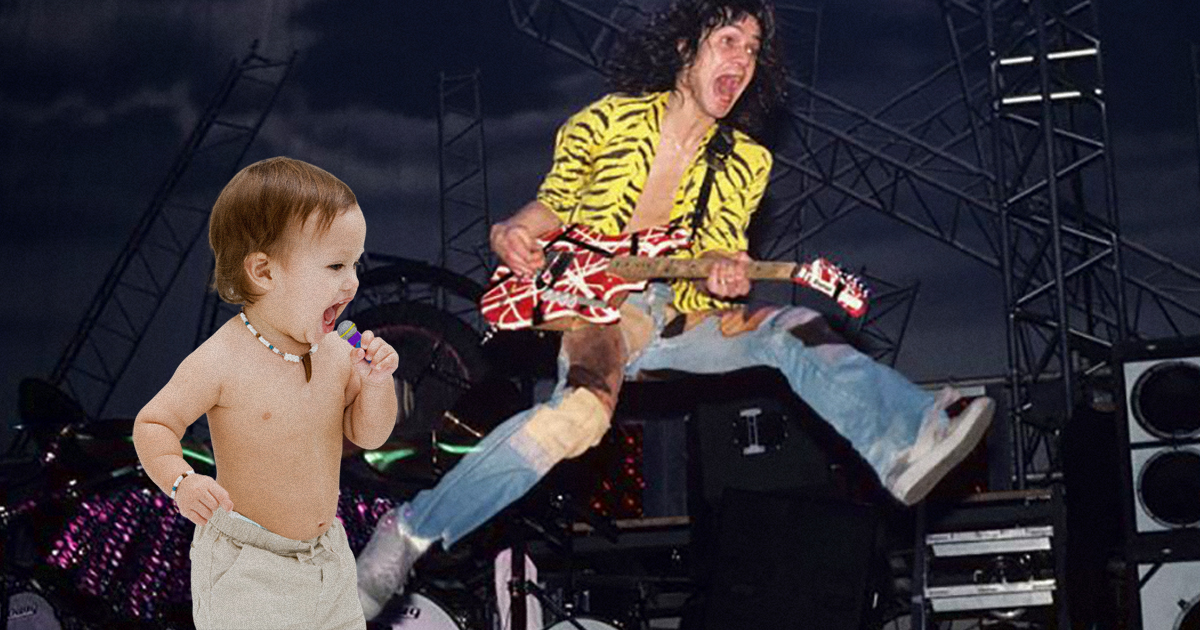 For decades, the hard rock behemoth that was Van Halen ruled the airwaves with the groundbreaking combination of Eddie Van Halen’s virtuoso guitar-playing, Michael Anthony’s bold bass and clear backing vocals, and Alex Van Halen’s ability to keep a beat. As we all know, Van Halen ran through a number of lead singers over the years. And as we also all know, we live in an infinite multiverse of constantly branching possible timelines.

Here is our definitive list of the 7 Van Halen frontmen whose ethereal existence once threatened causality itself, but no longer.

#1: Derek Van Halen: the original lead singer and the eldest of the Van Halen brothers, he was legendary for his commanding stage presence and utter dominance of the band’s musical direction. However, his very existence was a rebuke to the primacy of Eddie and has been corrected.

#2: Samantha Hagger: one of the extremely rare occurrences of a female lead singer in Van Halen, she joined the band after drinking both Van Halen brothers under the table. Her time in the group came to an end when she was slain in personal combat by the Gary Cherone of dystopian timeline 3443B during the gladiatorial battles of the Chrono-War.

#3: Alan Weedon of Des Moines, IA: This otherwise ordinary man won a radio contest to sing “Why Can’t This Be Love?” at a single Van Halen concert. This technically qualifies him as a lead singer of Van Halen, and for the rest of his life, he would not shut the fuck up about it and had to be corrected just to give everyone a break.

#4: Martin Scorsese: Not the one you’re thinking of, just an Italian guy with a great set of pipes.

#5: Baby Lee Roth: One of the “bad boys” of hard rock, this charismatic 10-month old was notorious for his jump kicks, colorful onesies and unintelligible babbling. His infamous on-stage temper tantrums and ever-present baby bottle of Jack Daniels made Baby Lee Roth a legend, but the timeline cannot be altered. He was corrected.

#6: Eddie Money: In all other timelines but this one, Eddie Money eventually becomes lead singer of Van Halen, ushering their most commercially and artistically successful phase. The duo of what came to be known as “The Two Eddies” is properly regarded as the greatest songwriting partnership of all time. Honestly, the prime timeline kind of sucks in comparison.

#7: Adolf Hitler: okay, you know how in an infinite universe, everything must inevitably happen somewhere? In 7893, Hitler is the guy who sang “Hot for Teacher,” “Ain’t Talkin’ ‘bout Love,” and “Panama.” Sucks, but that’s the multiverse for you.