RECAP: The President of Punk Debate 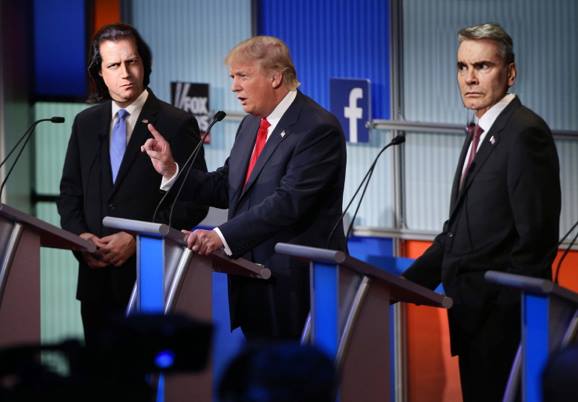 Cleveland, Ohio – With less than a year left before the President of Punk election, a dozen candidates from all across the spectrum of punk gathered in a disgusting, crowded basement to discuss important topics within the punk community.

The event – hosted at the Dumpster Palace (ask a punk) – was not one to be missed. However, since there was no cell phone reception in the basement, we’ve recapped some highlights for you until Aaron Cometbus can upload a vertical video to YouTube.

Reunion Shows: What is your opinion?

“Yeah, I mean, I was pretty against reunion shows, especially considering Kurt is still dead. But then some Portuguese marching band uploaded a video of them playing ‘Heart Shaped Box’ on the sousaphones and we had to re-unite.” – Dave Grohl of Nirvana

“Lol hxc. Looking for a kid. Need a drummer for next one, oi. lol Sadball.” – Rick Ta Life

What about selling out?

“Of records? No. I always balance the budget and keep the Dischord catalogue in stock, why would I ever sell out?” – Ian Mackaye of Minor Threat and Fugazi

“Well, pretty much anything I do at this point would be considered selling out. That said, does anyone want to buy a cool 7 inch?” – Jeff Rosenstock of Bomb the Music Industry!

“Honestly, I came here to try and get some food for my daughter. I didn’t realize it wasn’t free, though and I forgot my wallet. Can I just come back tomorrow and pay you guys?” – Fat Mike

Stage Diving and Moshing: If you were President of Punk, would you allow it at your shows?

“Absolutely not. I value life. Punk shows are supposed to be a safe place; a quiet place. A place where people can read any book they want, and they can even take home the books as long as they promise to return them. Maybe that book is one of my books, maybe it’s not. . . But most likely, it is.” – Henry Rollins

“On this issue, I’m proud to say I’m pro-choice. Moshpits and throwing fists are fine with me as long as I get to choke out the only guy in the venue who’s shorter than me.” – Glenn Danzig of Danzig and The Misfits

“Yea man, let’s see you all fuck this place up! Also, go on YouTube and search “Aliens and the Corn Syrup Conspiracy.” Open your fucking eyes and stage dive mudda fukka!” – John Joseph of the Cro Mags

“Not at our shows. Who do you think we are, Title Fight? No, we’re that other band that’s kinda like Title Fight but without the hardcore scene connections. We’re not going to pop up on any of your friends Instagrams just hanging out, so don’t pop up on our stage unless you want us to stop the song and scold you.” – Barry Johnson of Joyce Manor.

What can we do to get more women at shows?

“Well, that’s a great question. I’m in favor of amnesty. The women who have been here for a long time need a path to scene membership, and those who have been trying, legally, to join the scene for years but have been rejected need to be put at the front of the line. It’s a broken system that only welcomes skinny, self-hating white men with great hair and degrees in English Literature from east coast universities.” – Patrick Stickles of Titus Andronicus

“Maybe instead of worrying about how to get women at your shitty macho dude shows, you should just support good female musicians. Then again, what do I know? I am only a woman involved in the punk community.” – Corin Tucker of Sleater-Kinney

“We sell most of our shirts in girls sizes. Kurt (of Nirvana) would always talk to me about that when we (Kurt Cobain and I) would hang out, which we did alot because we (Kurt Cobain, lead guitarist and singer of Nirvana and I) were friends.” – That dude from Melvins

“When can I talk about 9/11?” –STZA of Choking Victim and Leftöver Crack

Closing remarks: Why do you feel you should be the President of Punk?

“Every punk clothing line has a parody shirt with my name and picture on it already. I’m more popular among 30-year-old punks than Jello Biafra.” – Taylor Swift

“Let’s talk about my record. I’m proud to say in my home state I started various programs that got a lot of people into punk. And now I do spoken word, which is the punkest form of retirement, second only to dying.” – Jello Biafra of the Dead Kennedys.

“I’m more punk than any of you immigrants. I’m 60-years-old and I still dye my hair better than Fat Mike. So much better. Way better.” – Donald Trump.

“The nation of punk has a horrible trade deficit: I’m giving you my presence, yet you’re not giving me enough free fries. Don’t you know who I am? I just want some fries. If you elect me as your president of punk, I will balance the fry budget on day one, as soon as I find my wallet.” – Fat Mike