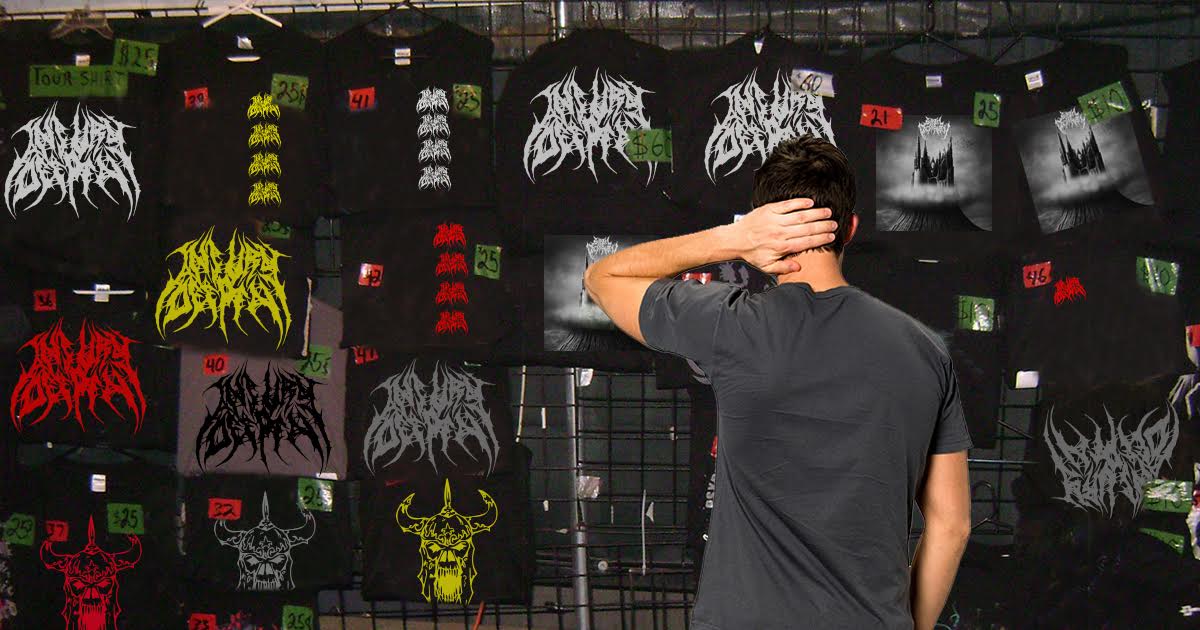 “Do you think people are gonna notice?” asked a black-denim clad Selay, anxiously pacing the alleyway behind the venue. “They might not. But they’re probably gonna notice, huh?”

Despite his reluctance to break the news to the band, Selay remained insistent he was not to blame for the shirt snafu.

“You see right here, where this corkscrew-y part meets this big spaghetti mess?” illustrated Selay on the shirt he intended to sell. “Yeah, well, the Vintercrypt logo goes curvy, criss-cross and then spaghetti. I mean, hindsight is 20/20, but there’s no orientation for merch guys. You try and lock into a shape and hope for the best. This could’ve happened to anyone.”

Witnesses report fans inside the show became increasingly suspicious of their new purchases as well. For one fan, who requested anonymity, a closer inspection of his shirt lead to questions of fraud.

“Look at the zig-zaggy thing that leads into the loop-de-loop and then onto this tangled earbud headphones kind of shape,” noted the skeptical showgoer. “Does that look like a Y or an R to you… or an ampersand?”

The patron did say he plans to keep and wear the shirt, and hopes to avoid potential embarrassment of not being able to read the logo.

Seemingly coming to peace with his error, the 30-year-old Selay admits this is likely the end of the line for him as a merch guy.

“It’s just ironic, you know? I left the punk merch guy life hoping to get away from all this hypocrisy,” recalled Selay. “Everyone says they’re here for the music and ‘not just the corporate cash machine,’ but you spend one show selling Disextinction back patches to Diseffection fans, and all of a sudden you’re the big scapegoat who cost everyone their precious dollars. I guess I just can’t catch a break.”