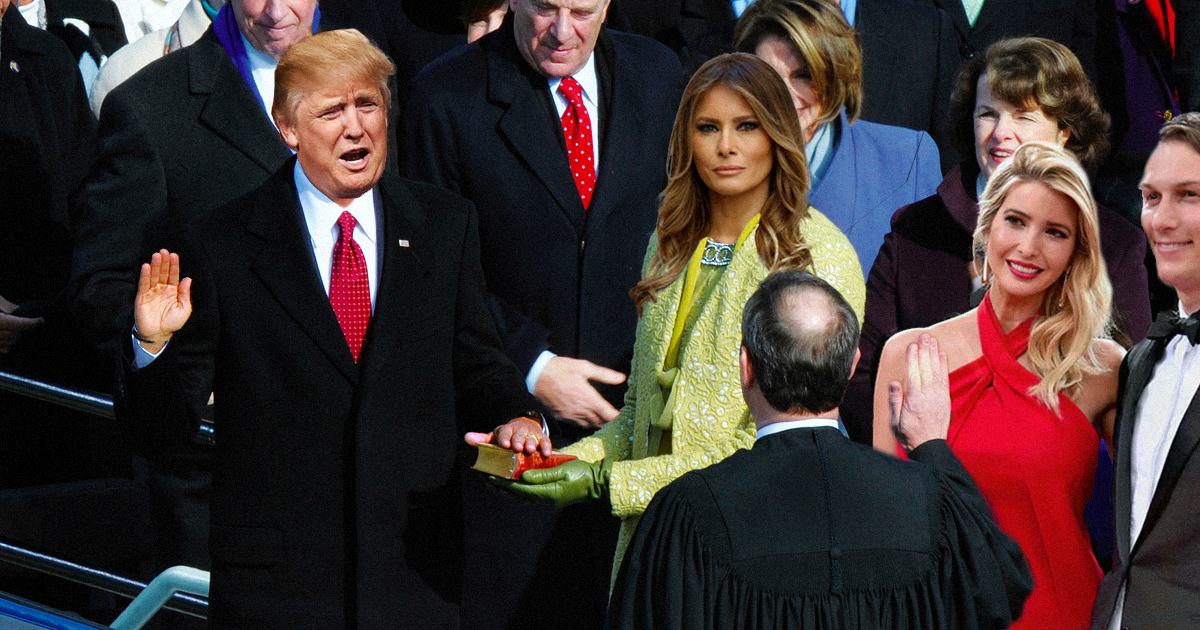 WASHINGTON – The 45th President of the United States and subject of a Green Day concept album already being written was inaugurated to the highest office in the land earlier today amidst fanfare and protest.

In a divisive ceremony, Donald J. Trump — who will likely be referred to as “Bishop Dan” or some shit on Green Day’s inevitable record about him — spoke about the need to “bring America together and unify as a country.” Despite rampant protests, the controversial businessman, whose ties to Russia will no doubt be represented in upcoming Green Day lyrics about “suicide comrades” or whatever, called the day a “huge success.”

“This is definitely something we’re preparing for,” said Representative Lynn Jenkins (R – KS). “We hoped after the failure of Uno, Dos, and that other one that the band might call it quits, but it looks like under Trump we’re just going to have to be ready for the worst. We could be dealing with another rock opera in less than four years. Frankly, the American people have suffered enough and deserve better.”

Others in Congress confirmed that panic over Green Day releasing another trite, self-important concept album had been mounting since Trump’s first shocking GOP primary victory in 2016.

“When Trump won the nomination, the first thing I did was search, ‘Is Green Day still a band?’ When I saw they were still active, I knew the worst was about to come,” said Senator Maria Cantwell (D – WA).

At his home in Oakland, Green Day frontman Billie Joe Armstrong took time from writing a song which will eventually become some kind of condemnation of the Miss Universe pageant to offer his surprise over the controversy.

“We just want to continue in the tradition of the Dead Kennedys and the Sex Pistols by using punk as a means of political resistance,” he said while working on the choreography of a play that will likely be titled something like “Trumpocalypse.” “That’s just who we are as a band.”

While President Trump denied repeated requests for comment, he did respond to concerns over a new Green Day concept album in a string of tweets sent during the inauguration proceedings, after the band declined his invitation to perform at a party later that night.

“Green Day are total fakes! Album is a complete hit job — not fair,” the tweet read. “Should get back to working on their songs not attacking me. Even Dookie was overrated. Sad!”