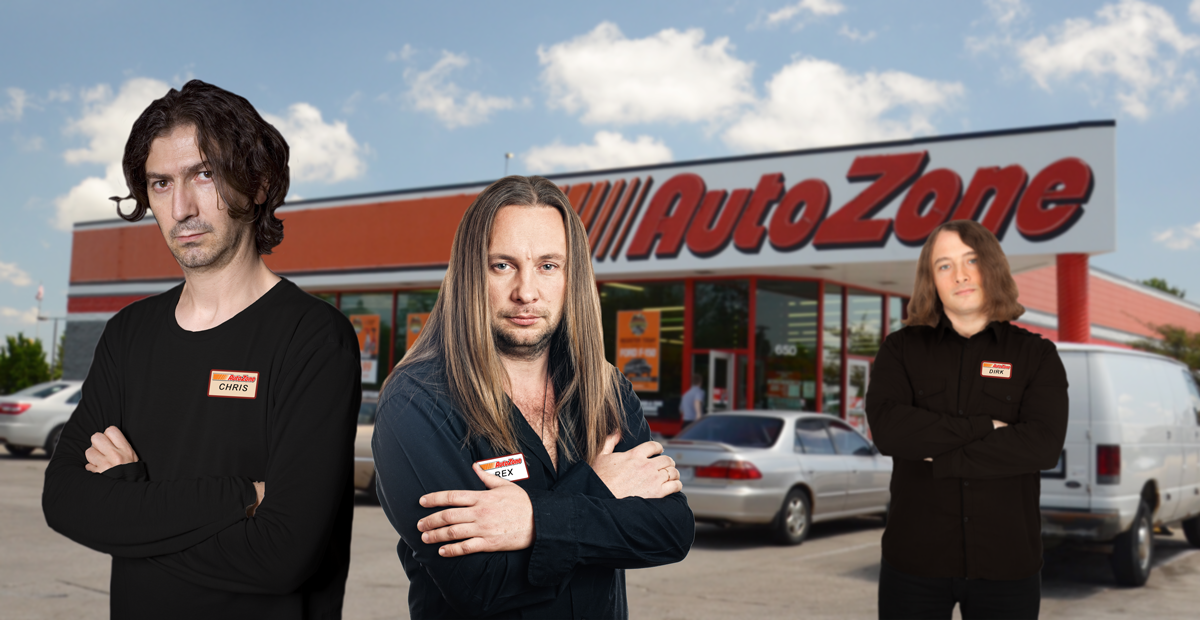 LOMBARD, Ill. — Panic and confusion set in at the AutoZone off of Main St. on Wednesday, when the entire staff, also known as the metal band Skeleton Crevasse, asked for the same Friday night off for an upcoming gig.

“I used to be the only member of Skeleton Crevasse working here,” said Tommy Darby, bassist and store manager. “But this one dude quit, so I got Nate [Turner, frontman/Assistant Manager] a job here, and then I was promoted, so I ousted some bad eggs and brought on Greg [Marsh, guitarist/Lead Sales Associate] and Reece [Whitfield, guitarist/Lead Sales Associate]. When Angel [Bosquez, drummer/Night Manager], lost her job at the Dairy Queen, I brought her on, too. I guess I didn’t think things through.”

The five-piece thrash metal outfit all thought working at the same store would be a benefit, believing they could workshop ideas while stocking motor-oil. At one point, they even set up a small practice space behind the battery wall.

“We usually cover for one another if someone is, like, hungover or something,” said Whitfield. “But we all have to be at the show. Technically, I turned in my request form first, so I sure as shit ain’t gonna be the one to stay behind.”

One witness confirmed Turner unsuccessfully tried to negotiate with Marsh.

“I was just trying to buy a gas cap,” said customer Harland Perkins. “But the long hair guy was begging the long goatee guy to close up and ‘just be a little late to the show,’ and they didn’t see me. The O’Reilly down the block had my cap, though, so I’m good.”

“Fuck [Turner]! If I close, I’ll miss the whole gig,” Marsh allegedly told Bosquez on a cigarette break. “Classic Nate — making me late, or burying my guitar in recording. If I didn’t know better, I’d think he wanted me out of the band.”

“Oh, yeah. If he wasn’t Tommy’s brother, he’d be gone for sure,” said Turner when reached for comment.

Request records show Darby reached out to the staff of another local AutoZone seeking “a solid,” but unfortunately, all employees, also members of The Black Adaptation, were slated to open the same Friday night show.