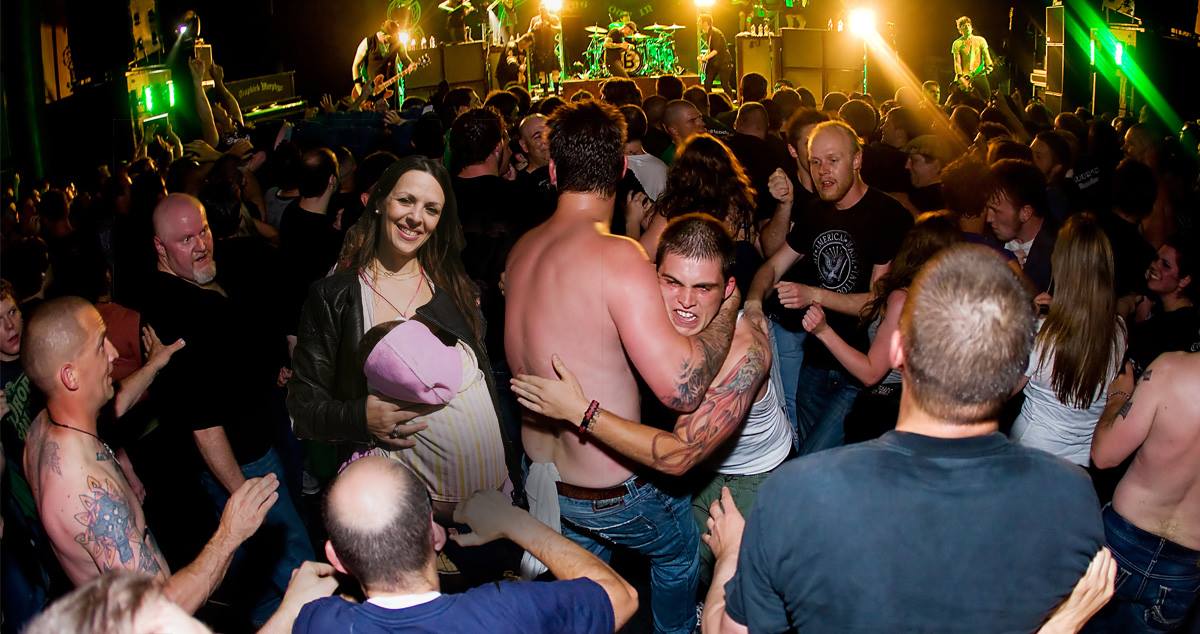 “It’s disgusting,” shouted “Gangrene,” a local punk and one of the vocal minority. “I came to this show to bust skulls, knock out teeth, and spit on posers. Blood, spit, and maybe a little piss… those are the only bodily fluids that should be expelled at a punk show. Tit milk? Ewww. What if some of it got on me?”

Most of the audience, however, did not seem to mind — or even notice — the “beautiful” act of motherhood occurring. “Dammit, really?! I could have seen a boob,” said underage pit participant Kevin. “That would have been awesome!”

“I am more impressed than anything,” stated bassist Mark Goldmund. “She managed to stay in the flow of the circle, whip her hair, and knock a few big dudes to the ground without the kid unlatching or spilling a drop!”

Experts say this marks a major turning point in slam dance culture. “While breastfeeding has always occurred in the pit, it was never this well received,” noted punk/lactation historian Michael Alonso. “Most notably, Barbara Hoover, a punk and new mother, was forcibly removed from a Bad Brains show for attempting to feed and pogo concurrently at CBGB in the early ‘80s. If it wasn’t for brave women like her, there might not be any babies at shows.”

“I usually try to just sneak off to the venue bathroom, but Charlie needed to eat and they just launched into ‘The World Owes Us Nothing,’” Sircroff stated after the show. “There was no way I was going to miss it! So I just unzipped the flap and let him go to town. Everyone was really cool about it. Well, mostly everyone.”

As breastfeeding begins to gain more public acceptance, other advocates of natural child development report a woman named Eclipse will give natural birth in a baby pool by the merch tables at the 2016 This Is Hardcore fest.