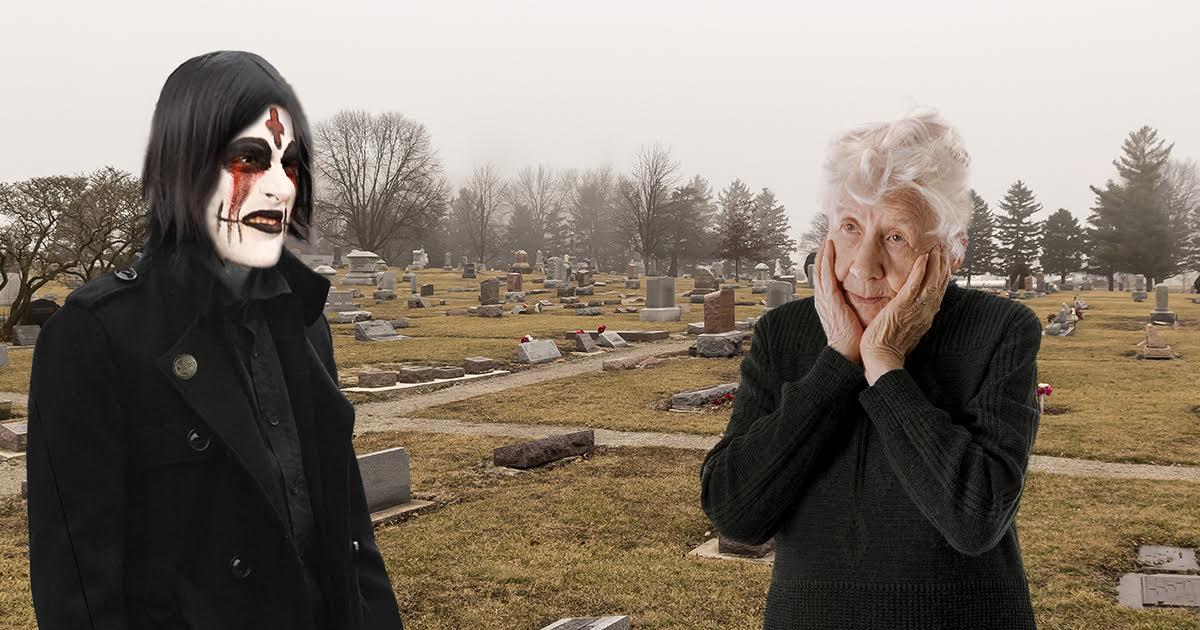 “It’s a perfect coincidence,” said lead vocalist Dom Duprese, taking a break from his morning routine of flipping through the Wilkes-Barre Times Leader obituary section. “I saw 85-year-old Ed Watkins died of a stroke just as we began scouting locations for the ‘Inverted Womb’ video. Never hurts to ask.”

Bassist Vernon Hubbard, a film studies graduate from nearby Luzerne County Community College and director of the shoot, was adamant about Decapitated Forest taking creative leaps with their latest video.

“Every black metal band films in a forest,” he said, meticulously organizing index cards on a corkboard to outline the scene order for the shoot. “But if we want to stand out from the pack, we need to film in a cemetery and a forest. This dead old guy is a real blessing.”

The band reportedly visited the widow Watkins with a variety of sympathy gifts, including a basket of dried rose petals, a dessert tray of “Death by Chocolate” cake, and a card that simply read, “It’s for the best.”

“We even offered to provide the tombstone if she gave us permission to film,” said guitarist Vlad Hogan. “I spend most of my weekends chiseling upside-down crosses from granite anyway. She could take one and flip it around the other way when we’re done, for all I care.”

Despite their offerings, the 79-year-old widow could not be persuaded to allow the filming. Witnesses noted the illustrated storyboard for the video further convinced her to decline.

“They wanted the lead singer to stand on top of the casket as Ed was lowered into the ground, from an overhead shot,” Mrs. Watkins said, holding back tears. “But the scene was clearly begging for a slow-rolling dolly shot, with me in the background placing a rose on the casket. If they don’t want to listen to my notes, screw ‘em.”

When Mrs. Watkins later listened to Decapitated Forest’s single, she confided privately that she’d made the right choice. “It was clearly a recycled Burzum riff,” she said. “I’m sure Ed is rolling in his grave as we speak over how unoriginal these guys are.”