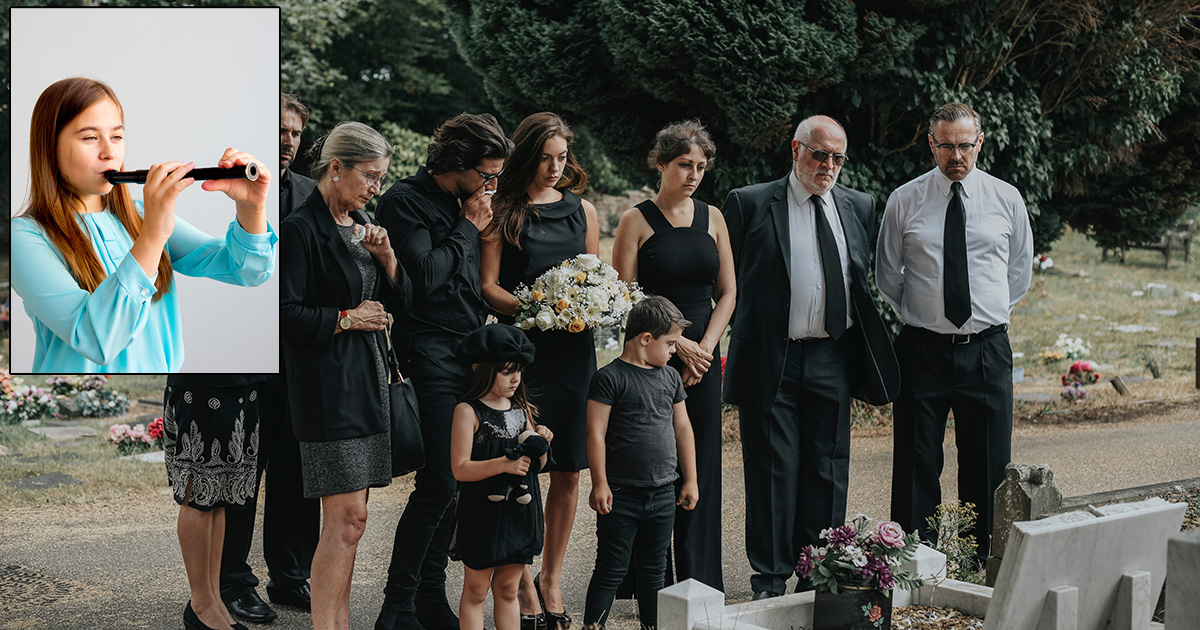 “I still can’t believe she’s gone,” lamented professional recordist Charlie “Toots” Clarke, 7. “Jenny was a mensch. She was the type of girl who would give you the last McNugget out of her Happy Meal without even asking her for it. Not to mention her skill. I mean, most of us just ‘play’ the recorder. Jenny transcended the recorder into a spiritual experience for her audiences. Her rendition of ‘Hot Cross Buns’ still brings me to tears even after all these years. We lost a giant.”

Wilson’s parents were shaken by the passing of their daughter, but were moved by the outpouring of kind words and support from fans and colleagues alike.

“It’s been really tough on us as parents,” admitted Wilson’s mother, Geannie Wilson. “Of course, nobody wants to go through the experience of burying one’s child, but it has also shed some light on who Jenny was as a person, and the huge influence she had on people. The response from the international recorder community has been overwhelming. Jenny died doing what she loved — playing a small handful of notes on a plastic woodwind instrument — and that’s evident now. Plus, we have another kid, so it could be worse.”

Wilson’s on-again, off-again girlfriend, Chelsea Bernstein, 10, offered a look into the sagely musician’s personal life outside of the constant touring and celebrity image that had dominated much of her later life.

“Jenny wasn’t ‘Jenny Wilson, oldest living internationally-famous recordist’ to me,” explained Bernstein. “She was just a person. A person with all of the flaws, quirks, and insecurities the rest of us have. I think that’s what attracted me to her in the first place. Her vulnerability. True, we did have our rocky patches along the way, like when her parents grounded her for two days, or when my parents took me to my grandma’s for the weekend. The distance put a huge strain on our relationship. But it was never anything a big bowl of Mac n’ Cheese and a marathon of Pokémon in my parent’s living room couldn’t fix. I’ll remember her for infinity plus one.”

Following the burial of Wilson, the title of “World’s Oldest Recorder Player” was passed on to eleven-year-old fifth grader from Oshkosh, Wisconsin, Johnny “Jaws” Baumgartner.