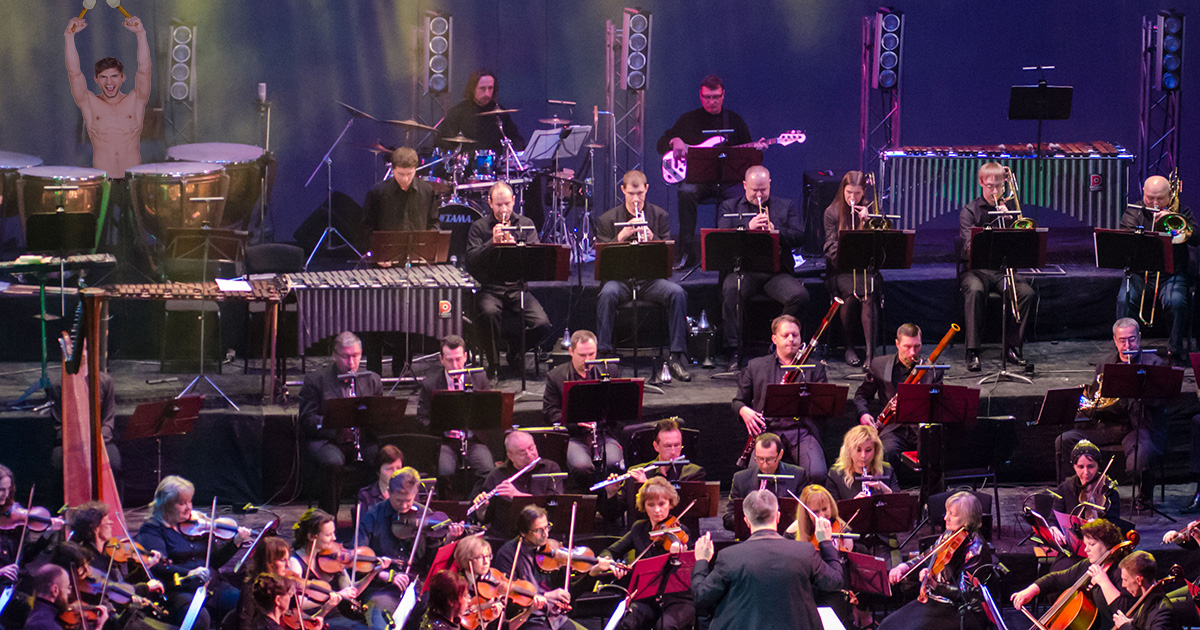 “I flew in from Kyoto to finally see Franz Liszt’s ‘Faust Symphony’ — my favorite, since my grandfather played it for me as a child,” said classical music enthusiast Satomi Takahashi. “The timpani player utterly ruined the evening, though — jumping in place from the moment the orchestra tuned up. To top it off, he shed his shirt right before the first loud timpani roll… brandishing his sweaty nipples for all to see.”

“This is not what classical music is about. Keep your primal violent rituals in New Jersey basements where they belong,” he added. “And please stop loudly referring to the crowd as ‘motherfuckers’ during the softer parts.”

Boyle’s entrance to the classical music world is as storied as his energetic performances.

“My band was playing a charity show at the Smiling Moose for nine members of the Pittsburgh punk scene who were arrested in a 7-11 cheeseburger/hot dog smuggling ring when the cops fucking busted in after Bobby Chin started lighting off M-80s,” recounted Boyle. “Anyways, I was chased across the Birmingham Bridge, all the way to downtown, when I jumped into Heinz Hall to hide. The orchestra was playing Wagner’s ‘Symphony in C Major’ and I lost my shit — it was so hardcore. So I traded my kit for a timpani drum on Craigslist… and the rest is history.”

Despite criticisms against Boyle’s demeanor and frequent disruptions, fellow members of the orchestra defended his inclusion.

“I do concede Scuzz’s methods are non-traditional and, frankly, uncouth. But there is no denying his technical ability,” professed conductor Franz Welser-Möst. “Not only is he expertly talented at percussion, he spends a majority of the time he’s not playing titillating the audience by spinning his timpani mallets and spraying beer out of his mouth to get them amped.”

While Boyle is quite aware of the murmurings against him, he remains steadfastly committed to his punk rock enthusiasm.

“You can’t listen to haters. Some people are just too cynical and don’t understand how someone can really fucking feel the music. I keep my PMA strong,” claimed Boyle while drinking a PBR tallboy in an alley behind the orchestral rehearsal space. “Like, Liszt’s ‘Faust Symphony’ gets me so fucking amped. I place it right up there with Beethoven’s ‘9th Symphony’ and Black Flag’s The First Four Years.”