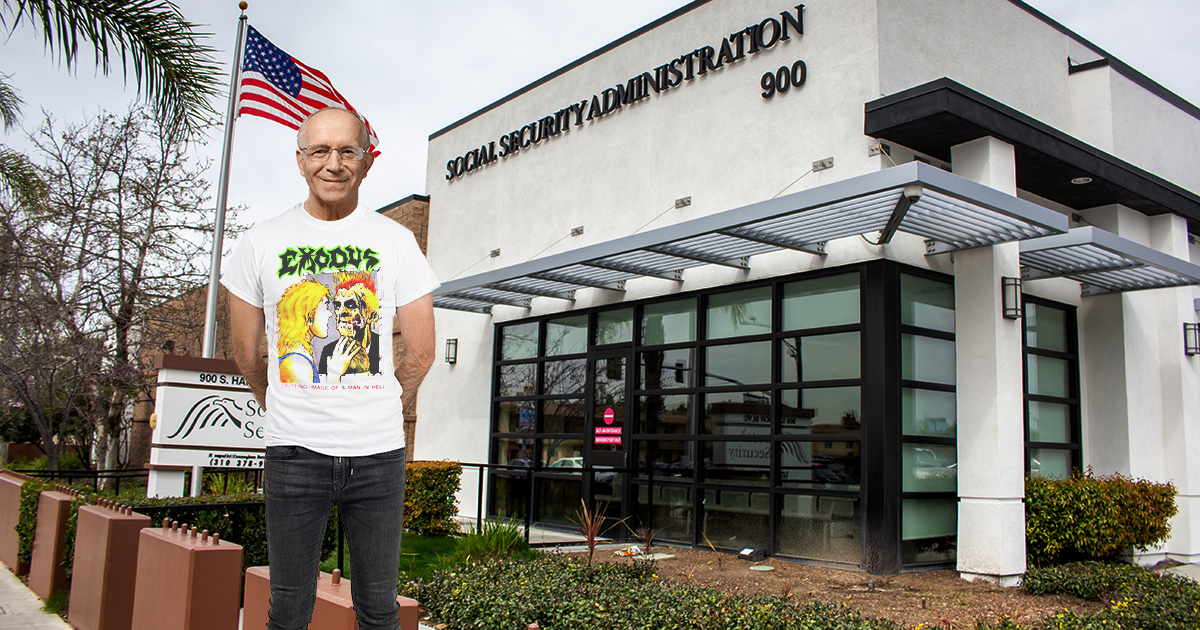 “Honestly, I don’t feel old enough to collect,” admitted Wendell “Spider” Bekes. “I may need an inflatable donut to sit on the toilet, or reading glasses to read the liner notes of the new Warbringer album, but I still feel like a kid — a kid who wakes up three times a night to pee and whose knees give out in the pit. I’m glad to be getting more beer money, though; I don’t really have any assets, save for this bitchin’ painting of a lady with big, meaty honkers holding a sword. Oh, and a tattoo of that painting. Maybe I’ll finally be able to buy a little doublewide in the woods and live the simple life. Just me, some Reingold, and a disturbing amount of WWII memorabilia.”

The Social Security Administration is worried the system won’t be able to support the number of thrash fans who will soon qualify.

“We didn’t think they’d live this long,” confided Social Security Commissioner Andrew Saul. “While all thrash fans were born in 1959 or later, their notoriously unhealthy lifestyles led us to believe we’d never have to pay out for them. They had lower wages than their big band and rockabilly parents, and consequently paid less money into the system over the years. And the system is struggling to pay out to the classic rock generation — we estimate thrashers will have to survive on $7.82 a day. Come to think of it, they should be used to that by now.”

In addition to lower standards of living, experts worry thrash fans will face unprecedented challenges in their golden-studded years.

“These are not healthy people,” bemoaned Dr. Minerva Lao. “The average thrash fan spent their youth mainlining Old Overholt and huffing paint thinner. Those who have survived to old age are afflicted with a variety of ailments, such Alopecia Mulettatta — commonly known as the skullet — and Crypt Dick. Without the funds for proper care, many may have to work at more than one gas station to make ends meet.”

Officials are also concerned that the Social Security coiffers will be depleted before nü-metal fans even become eligible.