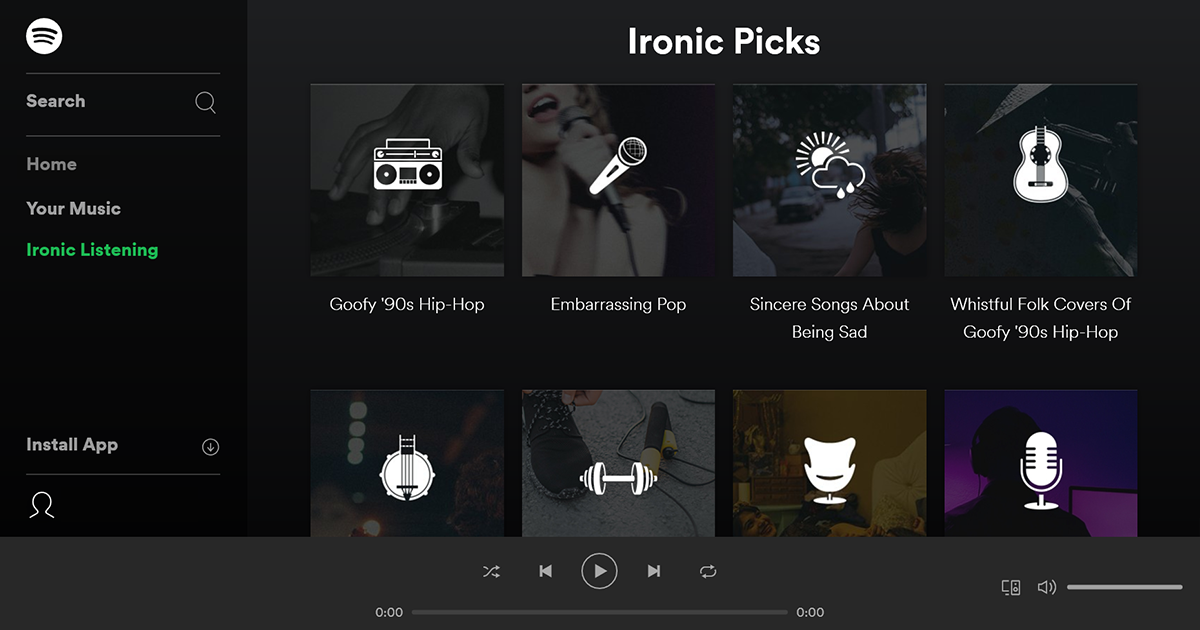 LONDON — Spotify unveiled a new feature yesterday: an ‘Ironic Listening’ mode, which will give users access to music solely for mocking it, without disrupting their actual musical preferences.

“We’re aware our users are just as savvy with music that defines their personalities as they are with the music that the ‘dumb’ people they hate enjoy,” said Spotify spokesperson Spjälle Mörner. “If a user wants to show their friend that Insane Clown Posse has a song called ‘Santa’s a Fat Bitch,’ we’d rather not let that affect their personal algorithms.”

Users worldwide are already growing fond of the feature.

“I listen to a lot of, like, chillwave and harsh noise, but I also needed to prove to my friend that the dude who owns Madison Square Garden has his own band,” said Miles Ramirez, a 29-year-old living in Williamsburg, N.Y. “So I played him J.D. & the Straight Shot in ‘Ironic’ mode. Two birds, one stone: now my friend knows how horrible that dude’s band is, and Spotify won’t suggest I listen to the Eagles or some other garbage.”

Spotify insisted artists will still be compensated for plays, regardless of the mode users listen in.

“Love my music or hate it, Spotify only pays me $4 a month for about a billion plays, so who cares,” said recording legend Kenny Loggins from his Pacific Palisades home. “So, go ahead and listen to ‘Danger Zone’ while you and your shirtless friends quote Top Gun and tickle each other while pretending you’re doing it ironically. It’s no skin off my ass.”

The feature has been lauded as a great improvement, but Spotify is not done tweaking, according to Mörner.

“We’re in the final stages of development for a new algorithm devoted entirely to music our users hate. For instance, if you listen to Gospel Gangstaz — the real-deal Christian gangster rap group — you might also want to hear another genre-defying Christian black metal band in Antestor,” explained Mörner. “We want our users to really get the full experience of all they can listen to.”

“We’re still working on ‘White Person Mode, though,’” added Mörner. “When complete, that’ll put you on a 20-minute ‘racial sensitivity timeout’ if the app hears a white user rap the n-word.”