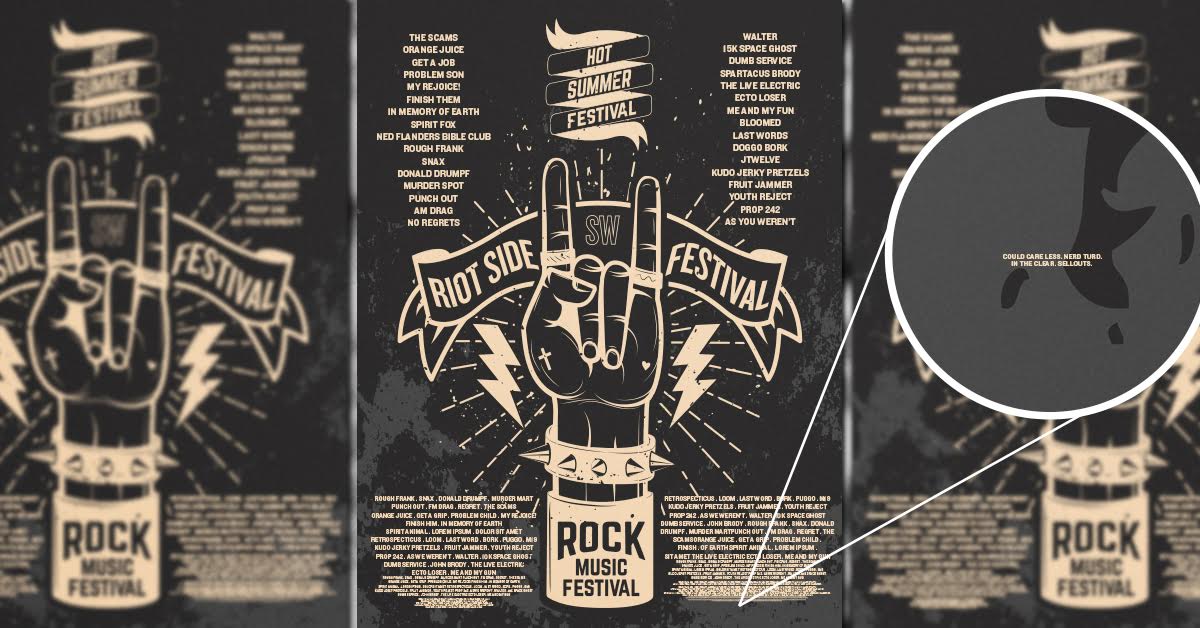 SANTA CRUZ, Calif. — Scientists at the University of California-Santa Cruz revealed this morning that, after extensive research and clinical trials, they have discovered a new microscopic font for festival posters to help promote shitty and unknown bands.

“Up until recently, we accepted as fact that size-four font was the smallest possible size for a band name on a festival poster,” lead researcher Dr. Jamie Leeds announced in a statement to the scientific community. “We didn’t believe font meant to advertise bands could actually get any smaller, but our findings proved otherwise.”

The discovery, to be featured within the Harvard Science Review, will have a tremendous impact for festival organizers like Mikaela Schafer, producer of Riot Side Festival SW.

“This is the best news I’ve heard since we realized we could charge a small fortune to show holograms of dead singers while a pre-recorded track plays over the sound system,” Schafer said. “The extra space will allow even larger font for well-known bands that groups people would actually pay money to see. Frankly, we hate wasting poster space on bands that paid to be part of the lineup — why bother with them? They can tweet to their 180 followers to let people know where they are playing.”

Although festival attendees will be the largest group impacted by the landmark breakthrough, music fans seem largely unfazed by the development. “I never even realized those names at the bottom of the poster were band names. I thought maybe they were directions to ticket links or whatever,” frequent festival attendee Corey Nixon said.

Graphic designer Jason Gonzalez admitted he’s eager to use the new microscopic font on his latest poster and lineup.

“I’ve been designing festival posters for years, and I never thought they could make the font any smaller for these bands who are most likely playing to a wide open field on a Thursday at noon,” said Gonzales. “What really excites me is the extra room on the posters for more sponsors. I love including corporate logos in my art, and the bigger the logo, the better.”

“We anticipate the new tiny font will be found on the bottom of festival posters around the globe,” Dr. Leeds continued. “You may have to whip out a microscope and make a weird face to actually read it, but I promise you — it is there.”