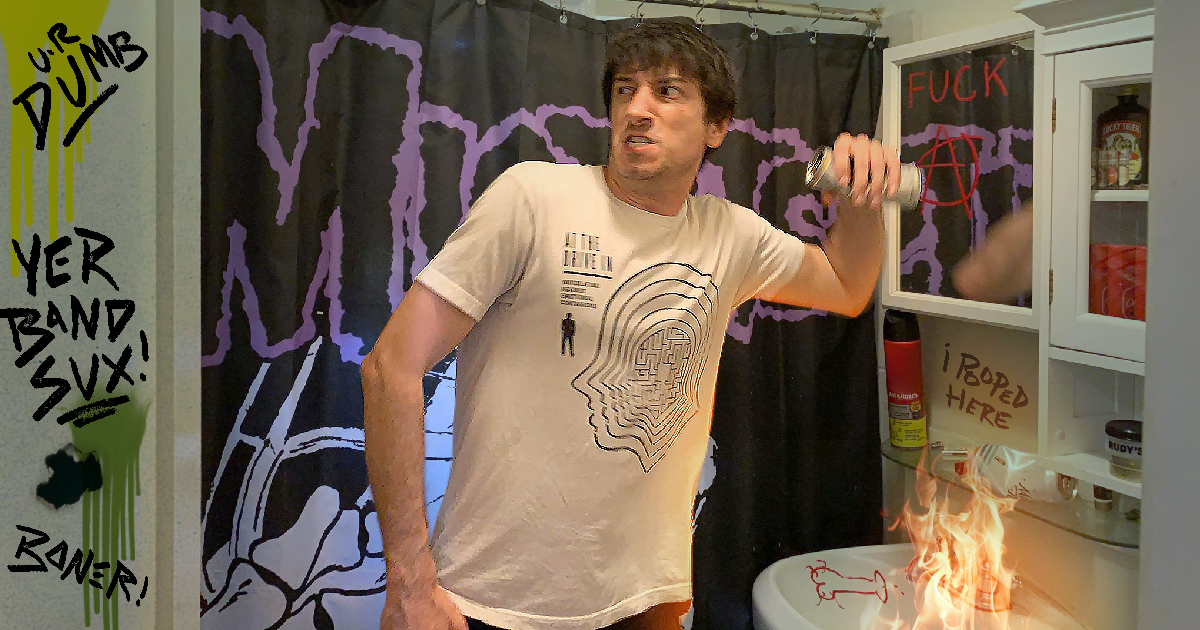 BROOKLYN — Quarantined punk Lex Sykes took to his own bathroom last week to practice his vandalism skills due to the ongoing closures of bars during the COVID-19 pandemic, horrified sources confirmed.

“What can I say? I didn’t want to get rusty, and I need to keep my creative juices flowing,” said Sykes shortly after scribbling multiple sexually suggestive messages on his own toilet. “I’ve just been sitting around all day, slurping down cranberry juice and watching tapes of old shows, and it’s been alright… but I feel like I’m slipping on my technique. I haven’t been able to sleep, just knowing all these bathrooms going un-vandalized for months that I’ll have to hit when this wraps up. It’s overwhelming. I have to be on my A-game when quarantine ends.”

Grace Gardner, Sykes’ roommate for the past three years, has been reluctantly supportive of him wreaking havoc on their communal bathroom.

“Bathroom graffiti is really the only thing that makes Lex happy. Slapping one of his band’s stickers in a urinal makes him light up like a kid on Christmas morning,” said Gardner while crossing out her phone number from a “for a good time call” tag Sykes just wrote. “He isn’t drinking as much as he usually does, hasn’t huffed glue in weeks… he’s taking better care of himself, and it’s clear he’s been depressed. But as soon as he pissed on our roll of toilet paper and punched a hole in the door, he was back to his normal self. I’m a little upset about losing our security deposit, but for him to feel confident in his vandalizing skills? Well, you can’t put a price on that.”

Randy Pitt, the highest-rated plumber in Williamsburg, was called to fix the shattered toilet this morning after Sykes got too hasty with his bathroom-bashing.

“The amount of bathrooms and kitchens I’ve been called to fix is staggering,” said Pitt. “It’s not just punks making bathrooms into inhospitable warzones — it’s also mild-mannered housewives and the elderly, just looking to get out some aggression. Destruction of public amenities will run rampant once this wraps up. It’s going to be so bad, folks will be begging to be quarantined in their little shithole apartments again.”

In related news, bar owners across the city are encouraged to stop scraping stickers off their bathroom walls, as landfills in the tri-state area have exceeded their capacity to handle them.