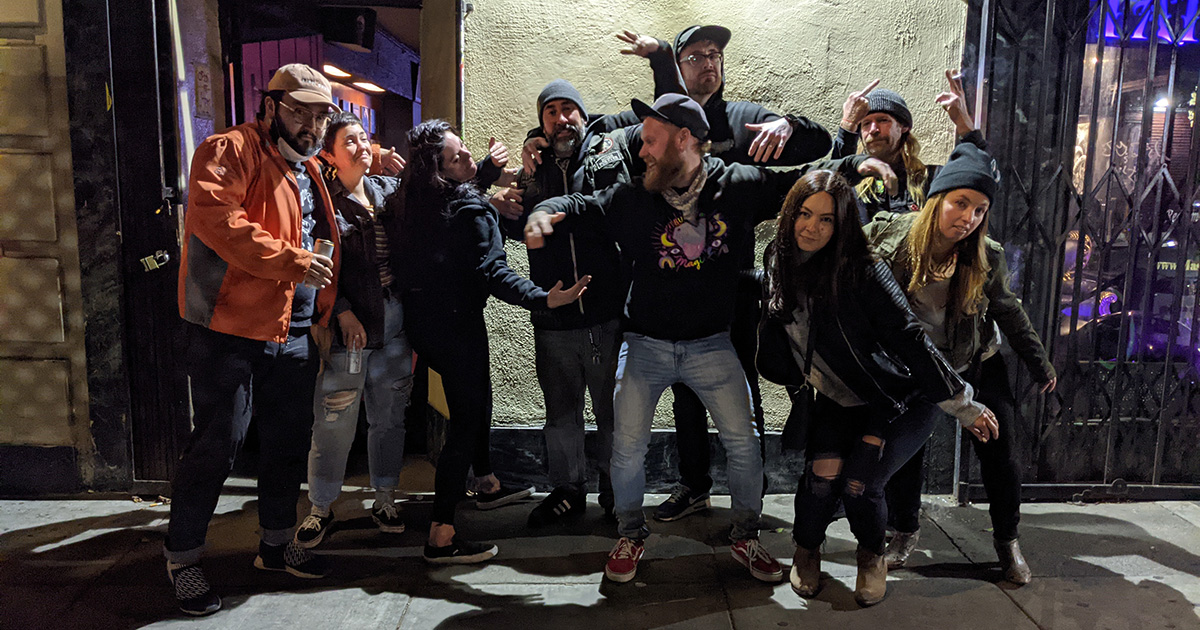 “We should have deleted it right away, and we definitely shouldn’t have captioned it ‘Fuck with us and end up six feet deep.’ We look dumb as fuck right now,” said Derrick Walker, reflecting on the terrible photo. “We used to look tough as hell before the pandemic, but we all gained weight and lost a lot of muscle mass. Look, these are the softest hardstyles I’ve ever seen. None of us look even remotely hard. We sort of look like accountants dressed as ‘tough guys’ for Halloween.”

With shows back and in full swing, hardcore kids across the country making up for lost time by taking crew pics may be doing more harm than good for their friend group.

“I feel bad saying this because I know the past year and a half has been hard on everyone, but come on guys. First, you can tell they are all winded in the photo. And second, one of them is smiling like a goober. Tough people don’t smile, they grimace,” said Reba Baker who came across the photo on Instagram after the exact same photo had been posted by at least six of the people pictured. “And the icing on the cake is that most of them don’t even seem to know where the camera is. It looks more like a drunken family photo from a bad wedding, and not so much a group of intimidating thugs you don’t want to bump into late at night.”

Crew Pic Expert Erick Chaves weighed in offering his decades of experience both taking and posing in crew pics since the late ‘80s.

“The fact that there was no communication here whatsoever exhibits such a lack of vision it honestly makes me cringe to even call it a crew pic,” said Chaves. “It’s all wrong, it has none of the makings of a solid crew pic, not one person is holding a weapon, or throwing up an ironic gang sign. I don’t even see a single person with their arms crossed. It’s a slap in the face to all the self-respecting crews out there.”

At press time, members of the crew were seen talking with police hoping to recover a beanie that was stolen from them by a group of teenagers on scooters.