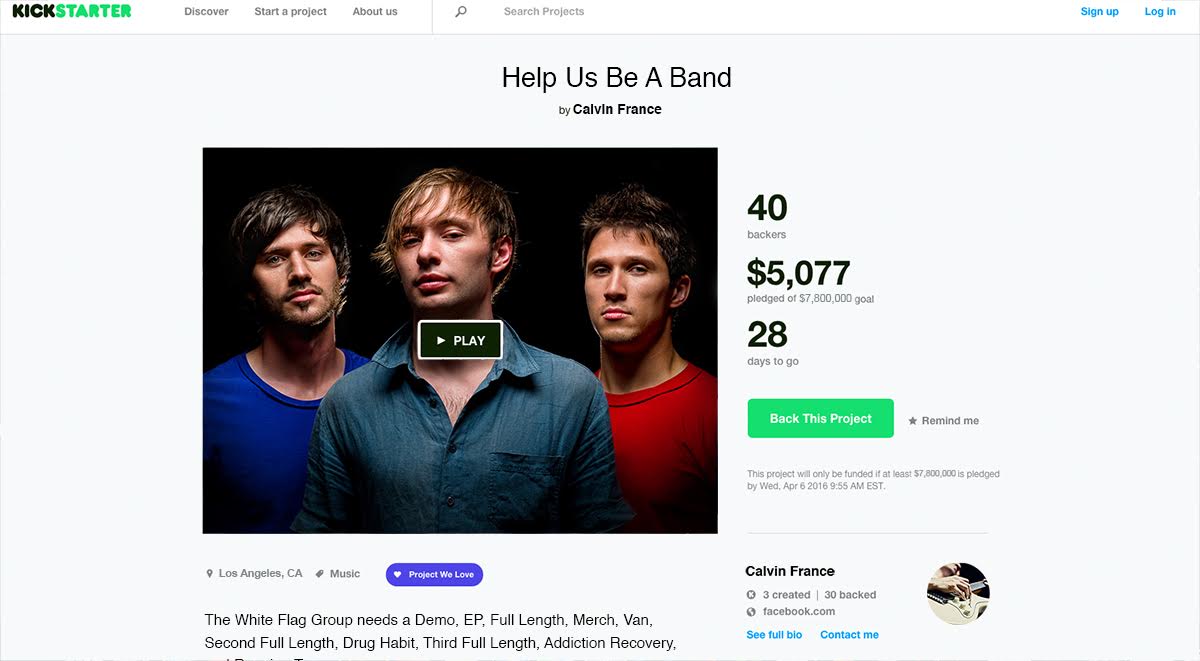 The White Flag Group are asking supporters for a donation of $7.8 Million, a sum they say is the bare minimum needed to achieve their artistic endeavors. “In this day and age, I don’t see how it is possible to create music and fame without significant financial backing,” said guitarist Calvin France in the opening of their Kickstarter Video.

The three-piece band explained how the money will be used over the course of a 15-20 year career, paying for essentials such as early recordings, a van, and irreverent merchandise, such as action figures and miniature hats. “We need our backers to fund t-shirt expenses so we can reward our backers with t-shirts,” explains bassist Kate Green. “Also, if anyone wants to design the shirts, that would be great, and we still need to write songs if anyone wants to help with that. A practice space and some better equipment just to get things moving would be cool, too.”

Even though the band has been in existence for slightly longer than a week, that does not hinder their projections of success. Drummer Nurav Bondi goes on to predict “…our second full length, which comes out in 2019, will be a critically acclaimed masterpiece. 20 tracks recorded and produced with [Butch] Vig, thanks to you. The success will follow with a lot of media attention. However, this will only heighten our desire to escape the limelight by partaking in heavy substance abuse.”

“I’m straight edge now,” adds France, “but I’ll hit rock bottom, and this will show in my songwriting. Our third LP will be a total train wreck. It will ruin us. So we’ll need your support to sustain a crippling drug addiction.”

By 2024, the band expects to have fallen far from grace and disbanded. “You will hear the occasional tabloid about how Kate got in a bar fight, or Calvin’s embarrassing sex tape. This is when we’ll need your money the most,” pleads Bondi.

After completing a successful stint in treatment, the band plans on rebuilding the bond that put them together in the first place just one week ago. “We’ll use the remaining money to go on one last reunion tour, even though we’ll barely be on speaking terms with each other. So we will need three individual coach busses.”

The band maintains they are keeping with their strong belief in DIY ethics. “We have always believed in doing things yourself, like creating a Kickstarter,” says France. “We made up the username and password all on our own.”