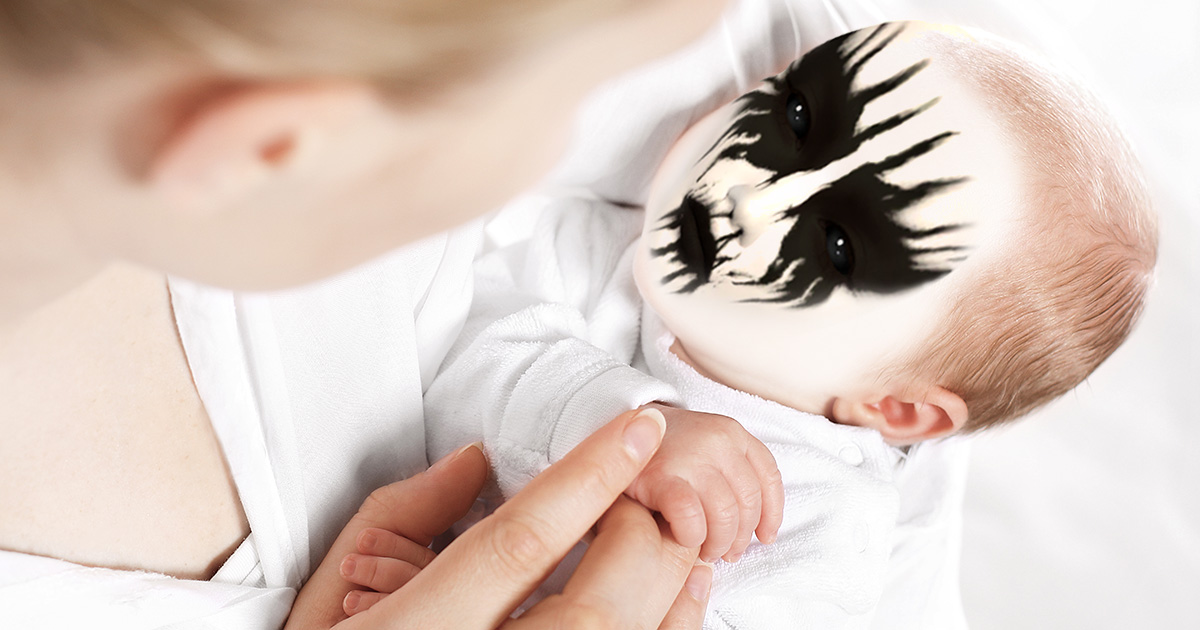 “I love baby Elijah no matter what, but I have to admit I was a bit freaked out when I saw those creepy markings and his deep scowl,” said Mr. Desmond. “I don’t want to jump to conclusions, but I couldn’t help wondering—could this have something to do with my neighbor? Wendy has been taking guitar lessons from him, she started wearing Emperor long sleeve shirts, and constantly talks about wanting to visit the Scandinavian countries. She used to just be into pop music, maybe some indie stuff. But you know, good for her for pursuing new interests, I guess?”

Neighbor Damien Invictus of the black metal band Interminable Bloodmoon insists there’s nothing to be concerned about and that the relationship is strictly platonic.

“Wendy is my student, and yes, she’s become a friend,” said the long-haired guitarist while he sharpened an ornate Viking sword. “I’ve been able to introduce her to some new music and new ways of thinking and I was surprised how quickly she took to it. Eventually, I started showing her how to play some riffs, that’s all. As far as accusations of impropriety, that’s utter nonsense. If you look at the baby’s facial markings, you can see that it’s more of a modern Swedish style, while my own aesthetic is one hundred percent classic 90s Norwegian. Anyone can see how absurd the allegations of an affair are based on that fact alone.”

Geneticist Stephen Zhang says that while extremely rare, it is possible that repeated, prolonged use of makeup could be passed down to an offspring, lending some credence to Desmond’s suspicions.

“There is some research in the nascent field of cosmetic epigenetics that could explain such phenomena where superficial alterations to a parent’s body could be inherited by offspring,” said Dr. Zhang. “I recently researched the case of a heavily tattooed punk couple whose baby was born with a birthmark that clearly spelled out ‘ACAB.’ Some of my colleagues believe these occurrences are a natural extension of the evolutionary process. Personally, I blame 5G.”

At press time, Mrs. Desmond left her accounting job to serve as Interminable Bloodmoon’s tour manager and was planning on taking Elijah to join the band on the road for several months.