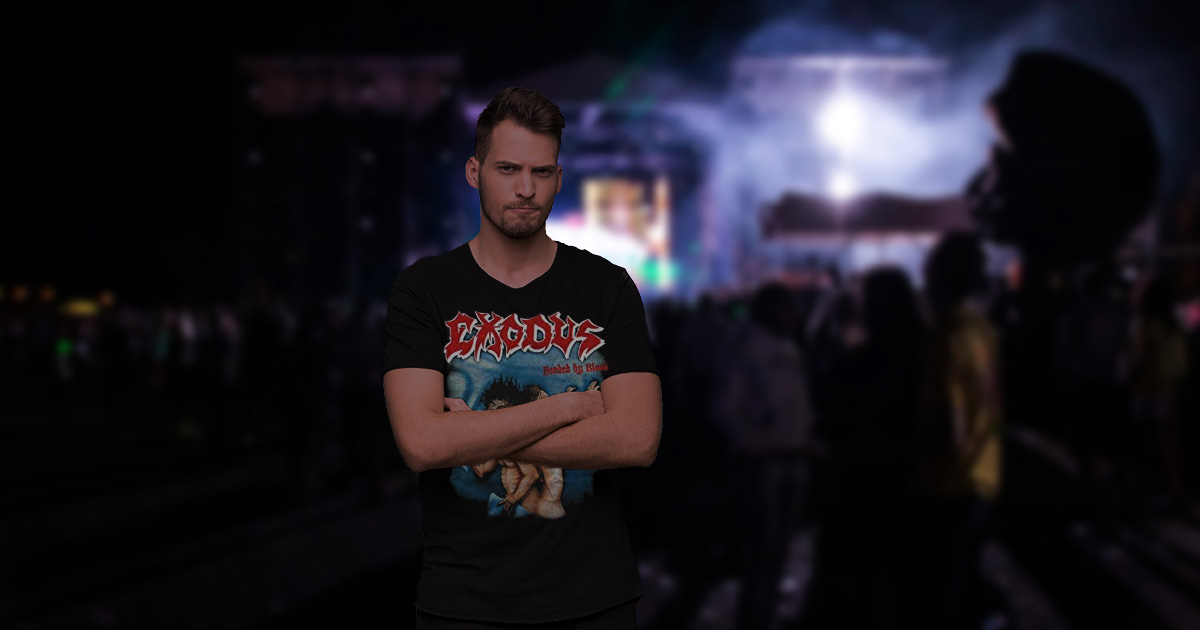 “You know when you have a nightmare about showing up to class in nothing but your underwear, and everyone laughs at you? Try multiplying that by a million,” said Campbell, who flipped the shirt inside out to try to save face. “I didn’t even realize I wore it until I arrived at the venue, and everyone stared at me like I had leprosy.”

“The night was going so well,” said local doom guy Matt Szoscek. “I settled in with my oatmeal stout, ready to revel in some slow, heavy riffs from my favorite doom band, Snore… when this jackass walks in with a fucking Exodus shirt, like some excited little Chihuahua sniffing a Doberman’s ass. Clearly, it was some sort of statement.”

“When I saw that asshole, it made me speed up to 60 bpm right in the middle of a 13 minute song,” said Crümb vocalist Randy Woodhouse. “Don’t let the door hit you on the ass on the way out, bitch!”

Campbell ultimately spent most of the show behind a bar stool next to a potted plant.

“It wasn’t my fault! I have a very specific system when it comes to my shirt drawer, but apparently, my mom stocked it wrong,” claimed Campbell. “Power metal on the left fifth, black metal next to that, Christian metal rolled up in the back, thrash metal adjacent to black metal, grindcore spread all around and sometimes in the sock drawer, and doom metal in the right fifth of the drawer, hugging ‘NWOBHM alley,’ as I like to call it. I fail to see how that is confusing.”

Sadly, Campbell’s issue may be genetic: at press time, Campbell’s little sister Jenny offended a car full of passengers after adding a grindcore song to her curated “thrashcore” playlist.