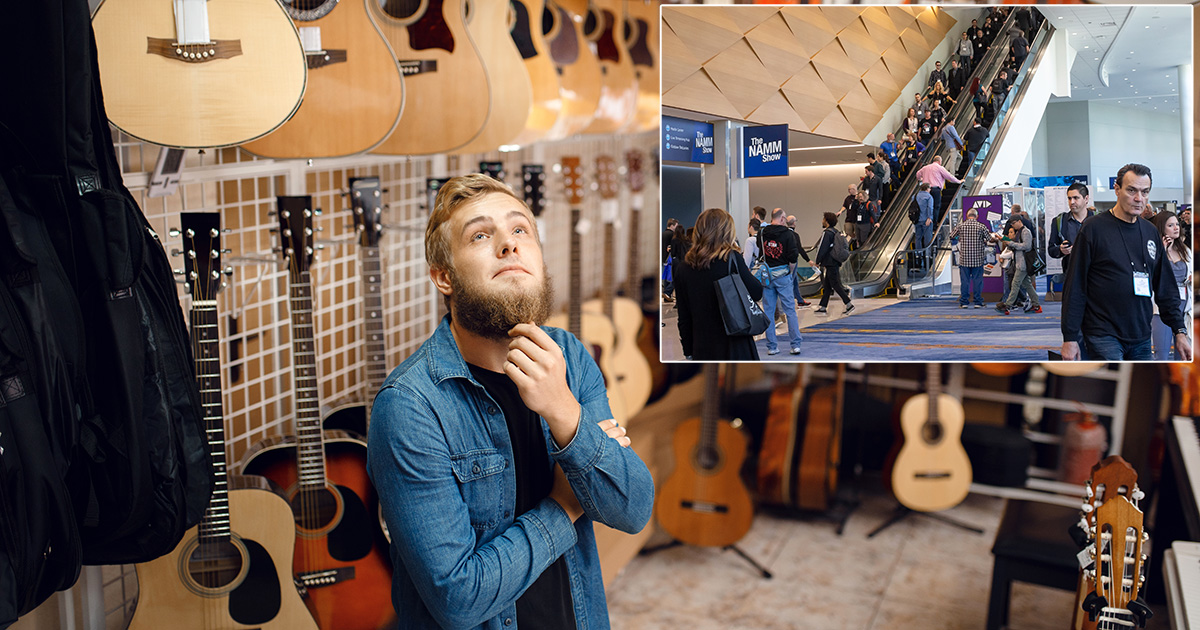 “I thought that I had finally moved past the horrors of my tour of NAMM until Saturday, when the store rose to a louder volume than usual. That’s when the vision started,” explained Potts, who was awarded the Deep Purple Heart by Guitar Zone’s owners for tinnitus suffered at NAMM. “It was like I was instantly transported back to Anaheim — there were guitar and amp demos happening all around me, pedal makers were chattering about ‘true bypass,’ and I had visions of guitars with 7, 8, and… and… dear Lord, 9 strings with fanned fretboards. The wickedness of man’s soul knows no bounds.”

Citizens of Anaheim, California have grown weary with the never-ending quagmire which resuscitates every January.

“My hometown is unrecognizable. When will this onslaught end?” lamented longtime Anaheim resident Connie Vasquez. “Every January, thousands of content creators and guys with soul patches descend on our beautiful town to peddle their ugly guitars and overpriced amplifiers while increasing engagement with their YouTube channels. Whatever happened to plugging a Strat into a Marshall amp? Why do we need Bluetooth built into guitar strings?”

Psychologists have studied the effects of post-traumatic stress disorder for years now, but variations inflicted by music gear conventions have been studied far less.

“The disorientation and mental anguish of a music convention is unique compared to other versions of PTSD,” explained Dr. Brenda Fowler, director of psychology at Walter Reed Army Medical Center. “Music and music gear is generally considered a positive force in one’s life, but when presented in such a concentrated and bastardized manner, it can have devastating effects. In the case of Mr. Potts, he may never be able to hear someone crank up the gain on a 100-watt tube amp ever again.”

Reports indicate that Potts’ situation deteriorated even further when a Guitar Zone customer played the riff of The Rolling Stones’ “Paint It Black” through every in-stock Earthquaker Devices pedal simultaneously.