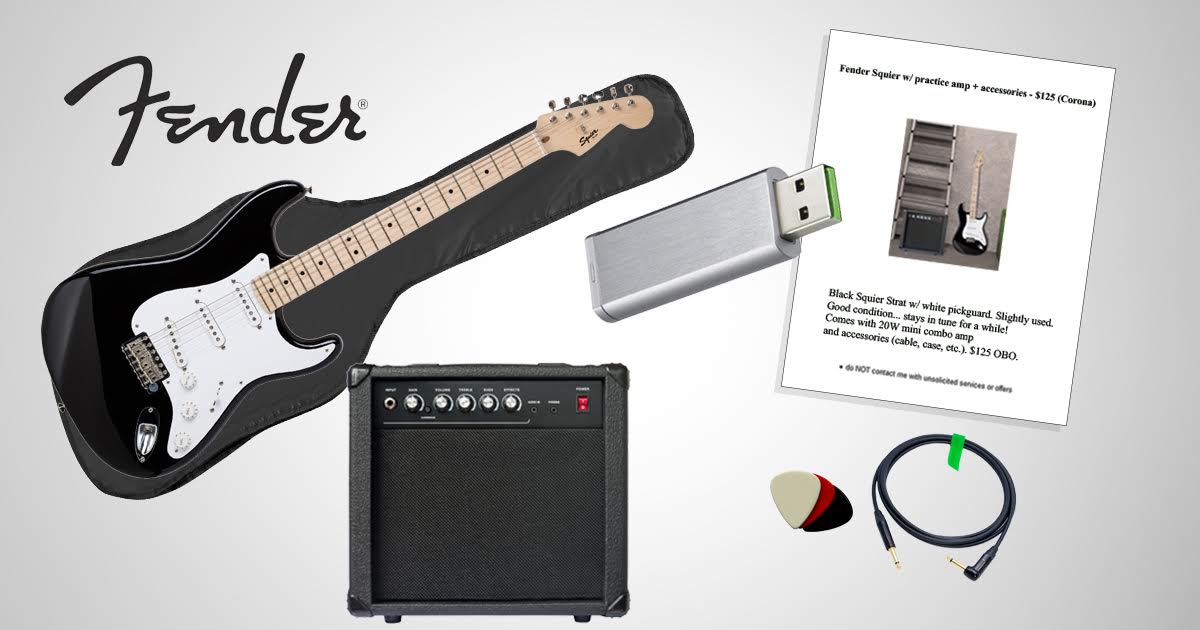 CORONA, Calif. — Fender Guitars will now include a prewritten Craigslist “for sale” ad inside every new Squier Stratocaster starter pack to help consumers re-sell the guitar more efficiently, according to company sources.

“To provide the best experience for our dedicated users, the starter pack will include a USB drive containing pictures of the guitar propped up against a garage wall, a text file to be copied and pasted, and a printable version of both for making flyers to leave at your local music store,” said Doug MacLean, Fender’s Director of Research and Development. “We’re very excited about the impact this can have on the secondary market and bedroom guitarists across the country.”

“Nolan has quit hockey, soccer, skateboarding, football, and basketball, so I’m sure he’ll quit guitar, too,” said local mother-of-three Deborah Hart. “Having the tools ready to sell this thing the moment he starts to whine about lessons is going to be a godsend.”

“I’ve always wanted to play guitar, but this pre-made Craigslist ad was actually the reason I bought the starter pack,” said Chad LeForge, car salesman and former high school football star. “My favorite part of the ad is that I look like I’m a real musician just getting rid of a few pieces. Looking like a rockstar without all the work of learning to play? It’s great!”

Although reactions have mainly been positive, some who work in the music industry had an alternate take.

“The rock ‘n’ roll lifestyle isn’t something you can just opt-out of, man,” said Sammy Howard, an employee at the local Guitar Center. “Back in the day, if you wanted to hock a crappy Squier, you had to find some 12-year-old kid and convince him it was a real instrument. This makes it too easy to rip people off!”

Experts predict the reselling initiative could potentially lead to over 3 million square feet of additional closet space available by late 2019.