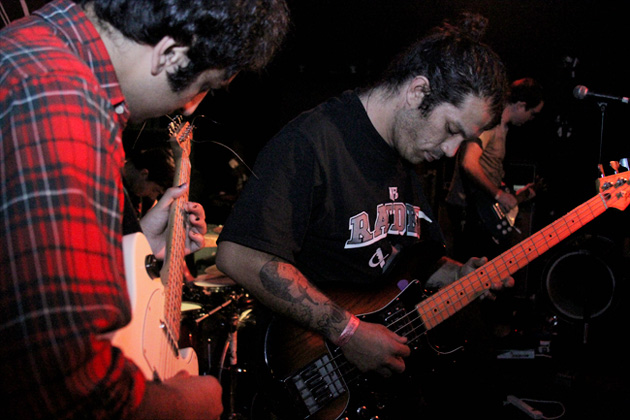 “It was a flawless performance. Just absolutely flawless. These guys are creating a new genre,” one pundit wrote on his Pitchfork worship blog. “When he started snoring I knew I was witnessing the best set of the year, possibly the best set of the century.”

This was just one of many positive reviews following the seemingly endless set.

“They are just so dark. I’ve never seen anything like it. I can’t even wrap my head around how they get so dark,” said journalist Terry Harris. “That the band must put something in their wash.”

Clark explained what caused his sudden lapse into unconsciousness.

“I was standing there, laying down the bass line for ‘Vertigo’ when I felt this warm calmness wash over my body. It was like I was all wrapped up in one of our signature Deafheaven Blankets©, being gently rocked from side to side,” said Clark while rubbing the dirt from his eyes. “It was so cozy that I thought I’d just close my eyes for a second.”

The next thing Clark remembered was Deafheaven guitarist Kerry McCoy kicking him in the ass and yelling “this isn’t fucking funny” while the band attempted to finish the song.

“I was tired, too, but I would never fall asleep on stage,” said McCoy. “This isn’t a fucking joke. Everyone was laughing. It’s not a joke. It’s not fucking funny. We’re creating a new genre.”

Deafheaven is no stranger to controversy. After canceling a tour due to lost luggage containing all of their black clothes, the band had their rider leaked to the public with it stating that each band member requires three lint rollers before taking the stage.

The Hard Times reached out to the Deafheaven vocalist for comment but his response was too low in the mix for us to understand.