Amateur GG Allin Impersonator Can’t Go With Everyone Watching Him 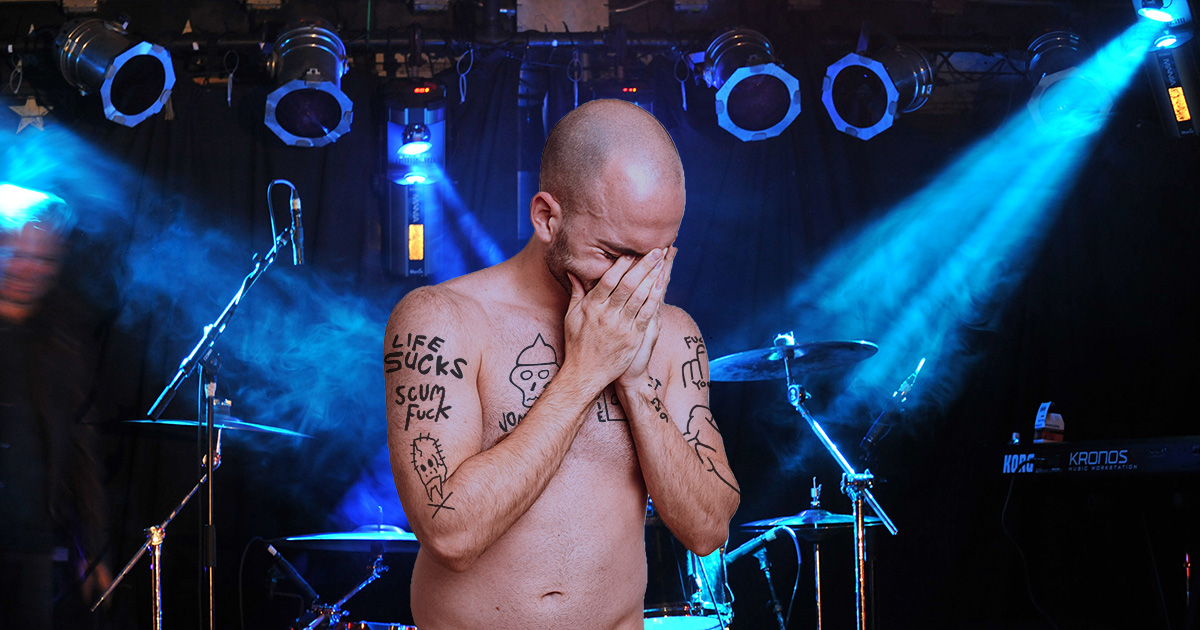 FORT WAYNE, Ind. — Amateur GG Allin impersonator, and introverted man that has no business being on any stage, Logan Ethridge insisted he was unable to “go #2” like his hero with everyone in the crowd watching him.

“He promised us that he was going to shit on stage just like GG. But after 30 minutes, it still didn’t happen,” said show attendee Vickie Wheeler. “Then when the big moment finally came he asked everyone to turn around so he ‘could B.M.’ He grunted for about ten minutes before then requesting we all hum ‘Twinkle, Twinkle, Little Star’ because apparently that would help him get started. Eventually everyone just silently walked out of the venue because it was way too sad.”

Fellow attendee Jay Matulewicz pointed out that in addition to public defecation, Ethridge tried and failed to replicate other aspects of Allin’s live show.

“I think he was attempting to start a fistfight with the crowd at one point, but he slipped and sort of lightly tapped me on the shoulder. Then he tried to play it off like he was swatting away a mosquito,” said Matulewicz. “A little while after that he brought out a banana and we were all hoping he would shove it up his ass, but instead he just sat down and started eating it because his ‘blood sugar was low.’”

Ethridge admitted that while his recent show wasn’t great, he will be working out some of the kinks for future performances.

“I know what you’re saying. Why not impersonate a more realistic alt personality like David Byrne or like, any of the guys from Weezer?” Ethridge stated while proudly showing off some fake poo he bought at a joke shop during a recent trip to New York City. “But believe it or not, GG Allin speaks to me. Even if I have been known to pass out at the site of my own blood, and I’m incredibly bashful when it comes to saying dirty words, I got big plans for improving my act — I’m not washing my hair all week, and I got a big thing of ketchup to circumvent that blood thing, and it’s not even the organic kind or anything.”

At press time, Ethridge has also purchased a nude bodysuit and drawn a smaller than average penis on the crotch.