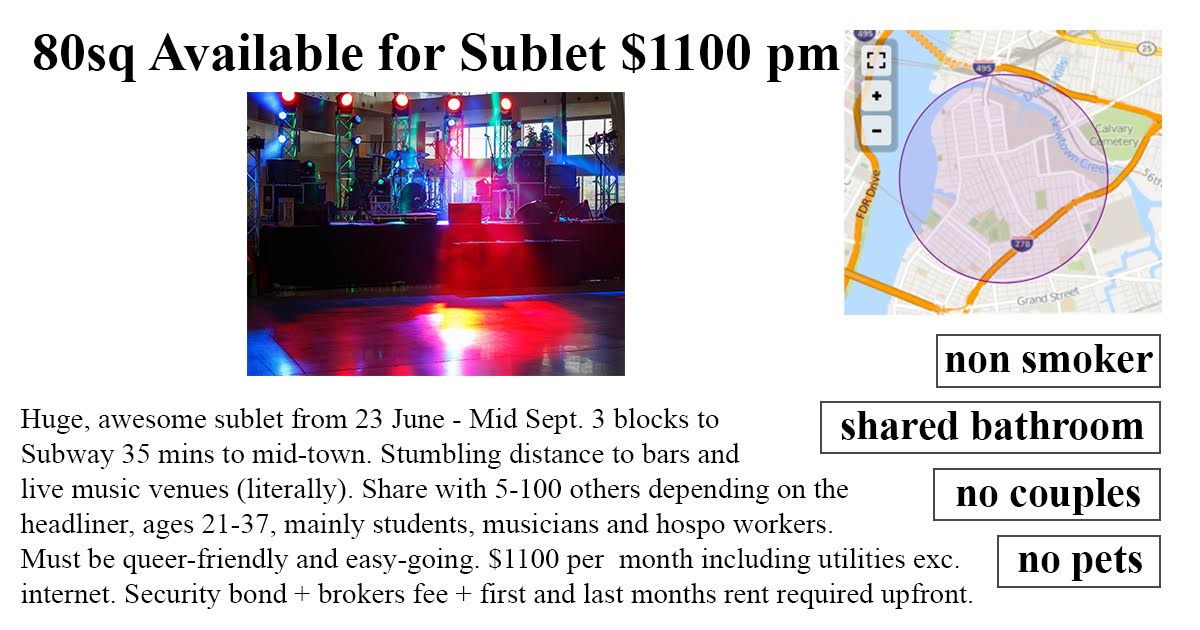 BROOKLYN — Post-punk band T.F.U. has listed the empty space in front of the stage for rent on Craigslist as a summer sublet, following several failed attempts to convince the audience to “move up” during their set, according to multiple reports.

Frontman Kevin Collins opted to lease the uninhabited 80-square-foot patch of concrete after a recent apartment search of his own left him frustrated by the scarcity of affordable property in New York City.

“If people don’t wanna get off their phones and move up from the back, then why the hell shouldn’t we make a couple extra bucks renting it out?” Collins said. “Shit, if I could get outta this 18-month lease my dad just co-signed, I’d be all over it myself. It’s got great lighting and is very private. Nobody would bother you there.”

The trio enlisted the help of real estate broker Terry Aquino to try to find a qualified renter as quickly as possible.

“Listen, this neighborhood has everything you could ever want,” Aquino said. “Bodegas, tons of bars… and that’s not even counting the one directly adjacent to the sleeping and living quarters. At only 35 minutes to midtown, door-to-door, you’d be a total fuck-up not to jump on an opportunity as sweet as this.”

Collins assured prospective tenants that, while the arrangement is certainly non-traditional, it isn’t without its perks.

“You’d share a bathroom with the bar, but they do serve tater tots until 11 p.m., plus free shows all the time. So it’s definitely got amenities,” he said.

Since posting online just 24 hours ago, T.F.U. have been flooded with responses from hopeful renters. They reportedly hope to begin the extensive interviewing process sometime next week.

“Well, it’s basically between this or the top bunk of a shared room in a basement apartment in Flushing… and that girl stopped texting me back, so I really hope this works out,” said Brooklyn native and occupational therapist Dalia Del Campo.

The sublet, listed at $1,100 per month including utilities “except internet,” requires the first- and last-month’s rent, security deposit, and a non-refundable broker’s fee to move in.

“Oh, and sorry, but no pets, no couples, and this is absolutely not 420 friendly,” Collins added. “This isn’t Airbnb, for fuck’s sake.”