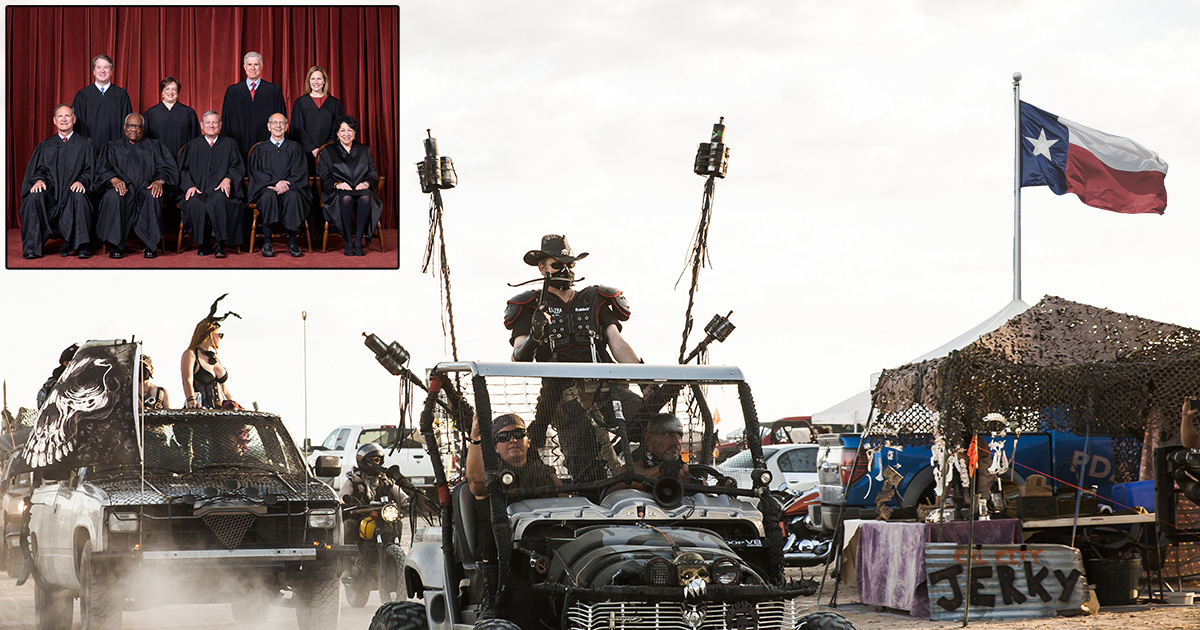 WASHINGTON, D.C — The Supreme Court of the United States recently decided, after allowing a law banning all abortions after six weeks, that the State of Texas is free to plummet into full-on apocalypse mode, sources who have no personal stake in any of this confirmed.

“By not interfering with the enactment of this new law, not only have we upheld the Constitution, but we’ve also allowed Texas to retain its freedom. Specifically, the freedom to be the shittiest hellhole it possibly can be,” explained accused sexual predator Brett Kavanaugh. “By making it illegal for women to get abortions long before most are even aware they’re pregnant, even in cases of rape, incest or threat to the health of the mother, Texans now have the opportunity to realize their state’s true Thunderdome potential. If you thought people stockpiling gasoline when Texas made driving a hybrid car a felony was crazy, boy, you ain’t seen nothing yet.”

Many Texans expressed support for their newly enacted subjugation.

“Look, I’m just a simple, red-blooded, God fearing American man. I like my beer cold, my cows slaughtered, and my women fertilized,” proclaimed Longview resident Billy “Bill” Gunderson. “If those hippie homos in California and New York think they can take away my right to force my ex-wives to pop out another Bill Jr., I’d like to see ‘em try. I was stockpiling ammo long before it was inevitable I’d soon have to fight off the roving gangs of leather-clad marauders that have been coming out of Houston. Yeehaw, assholes!”

Providers based out of Austin announced their intention to continue to offer abortion services to women seeking them despite the looming armageddon.

“This is just the latest attempt the State and the courts have made to restrict the services we provide. We’ve had to fight before and I’ll be damned if we’re not gonna fight again now,” said Courtney Clemons, MD, from the newly constructed sniper’s nest on the roof of the Austin Planned Parenthood. “I’m not gonna lie, things are pretty bad now. Earlier today I saw some pro lifers affixing big metal spikes and a flamethrower to the front of a dune buggy. But I’m still pro choice, and right now I’m choosing to kick Immortan Greg Abbott right in his immortan dick.”

At press time, Texas legislators were finalizing a bill to eliminate sex education entirely, replacing it with a single viewing of the stoner comedy “Knocked Up.”