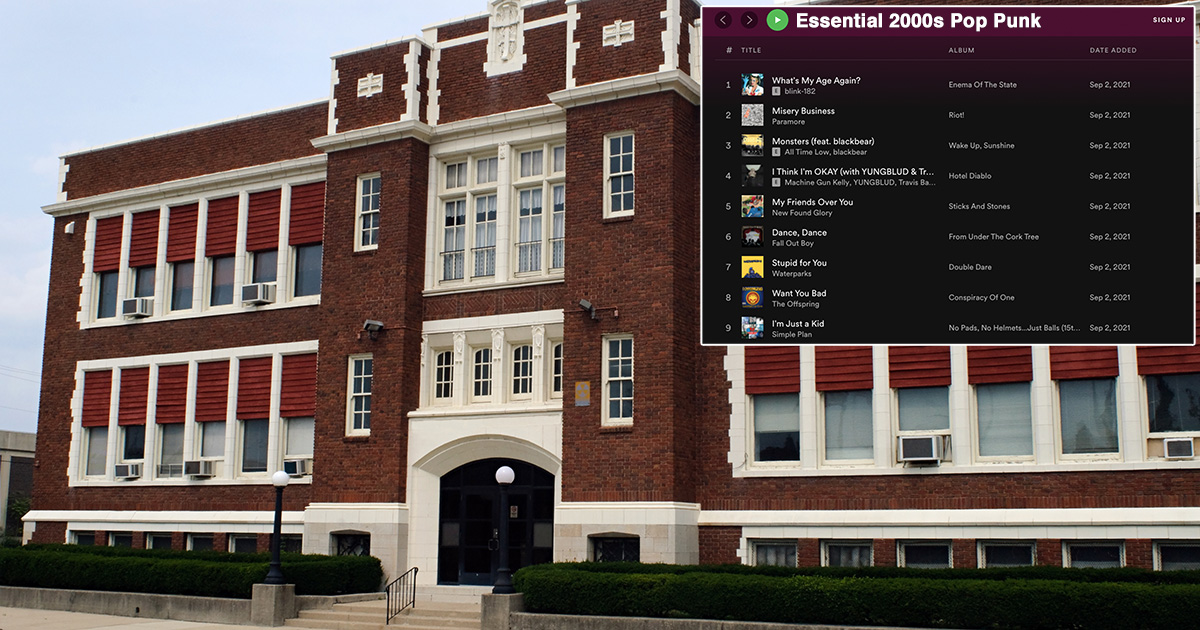 LOS ANGELES — A seemingly innocuous Spotify pop-punk playlist was ordered by a judge at the Los Angeles superior court to stay at least 100 feet from all schools and parks, confirmed lawyers for the streaming giant.

“This ‘essential’ playlist is nothing more than a laundry list of sex offenders spewing one-sided accounts of awful relationships in hopes an impressionable teenager will take pity on them. Sometimes they sing about their hometown being awful, but it’s mainly about grooming young women,” said Judge Leon Foster in his chambers. “For the safety of the community I had to set these restrictions. If that collection of songs is allowed to take hold in our schools then we might see a resurgence in ‘Myspace’ style hair and chunky pink Etnies shoes. I’m just glad we live in a world where LiveJournal is no longer a menace to our kids.”

Fans of the playlist immediately jumped to its defense and claimed this was government overreach.

“We need to separate the art from the artists here. Yes, every single band on this list has had to kick out at least one member because they had an inappropriate relationship with underage girls, but that doesn’t mean we should silence their songs about how you shouldn’t listen to your parents,” said 33-year-old pop-punk fan Andy Mitson. “This is a slippery slope. If things keep heading in this direction then soon pop-punk bands will only be able to play 21+ shows. That will be the death of the genre. Apparently this judge has never heard of age of consent laws, or long-awaited reunion shows.”

Spotify representatives were quick to comply with the new ruling.

“Customer safety is our number one priority. Thanks to the GPS setting in our app, we are able to mute the pop-punk playlist anytime someone listening gets too close to a school and instead start streaming the latest episode of Spotify original ‘The Michelle Obama Podcast,’” said Spotify Chief Human Resources Officer Katarina Berg. “In addition, anyone whose ‘Year-End Wrap’ contains more than 63% of questionable bands will be temporarily canceled.”

At press time, the “Best of Warped Tour” playlist was removed from the platform after dozens of women came forward saying the collection of songs solicited inappropriate photos of them when they were 16.