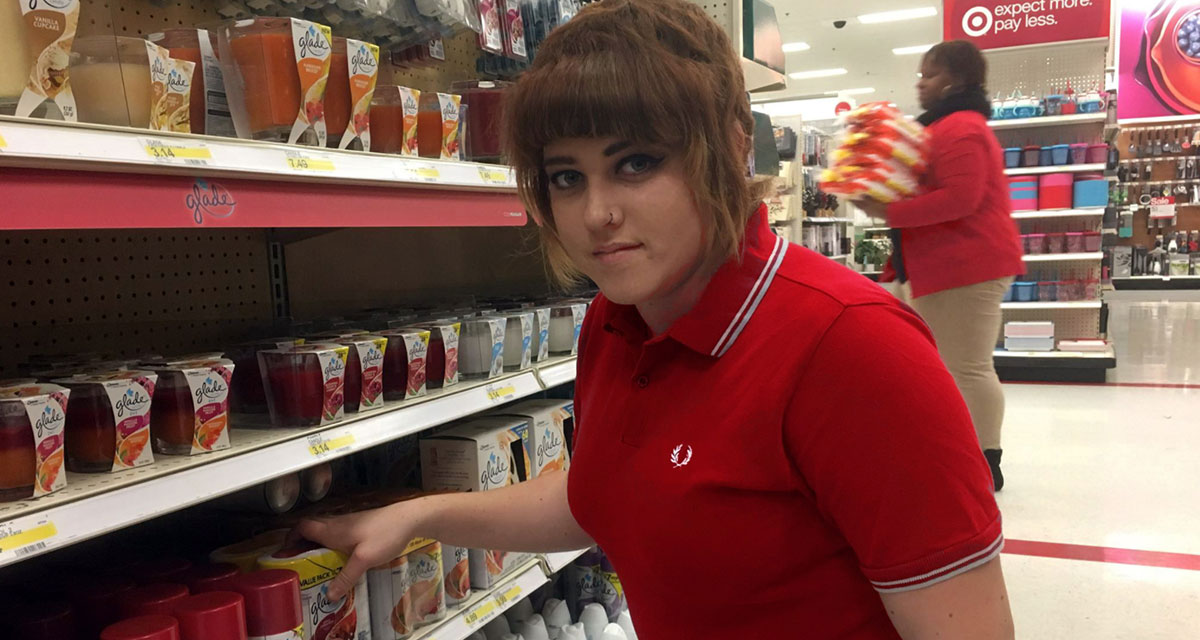 PEORIA, Ill. —  Local skinhead Melinda “Rude Girl” Rodriguez was unwittingly conscripted into service at a nearby Target when she wore her favorite red Fred Perry shirt while trying to shop at the retail giant, sources confirmed.

“I was looking for a come-up on some track pants and some new hair clippers on my only day off this week, and customers started asking me if there were any sales, or if there was anything ‘in the back.’ One thing led to another, and here we are,” said Rodriguez, quickly putting away a cart of “go-backs.” “My new manager Tanya (Bargazzi) just told me to go round up some carts from the parking lot, so I guess I should get used to this.”

Target management praised the work ethic of the accidental employee.

“Ms. Rodriguez is an exemplary employee,” said Bargazzi of her unclassified proletarian. “She doesn’t ask for much — just does the job. She seems perfectly built to handle the near-psychotic abuse of retail.

“I don’t think she’s taken a break yet, unlike Johnson over there,” Bargazzi continued, motioning disdainfully to an elderly man eating a sandwich.

Rodriguez, despite looking forward to her one day off this week in between swing shifts at the local metal factory, could not refuse the allure of more constant and tedious work.

“Employment is, like, 60 percent of my identity,” said Rodriguez while restocking shoe polish. “Plus, I only worked 72 hours at the factory this week and I was starting to get the feeling back in my feet. I’m no slouch — I’m a blue… well, red-collared American.”

Other Target employees admitted that Rodriguez has continued to work circles around them despite not officially being on the payroll and having no previous knowledge of the store.

“She takes this job so seriously,” said teen part-timer Caleb Herman. “Who the hell would run to clean up a broken pickle jar? For minimum wage? Not me.”

Management attempted to reward Rodriguez with complimentary popcorn and coffee from the Starbucks cafeteria, but were rebuffed by Ms. Rodriguez’s strict “no handouts” policy.