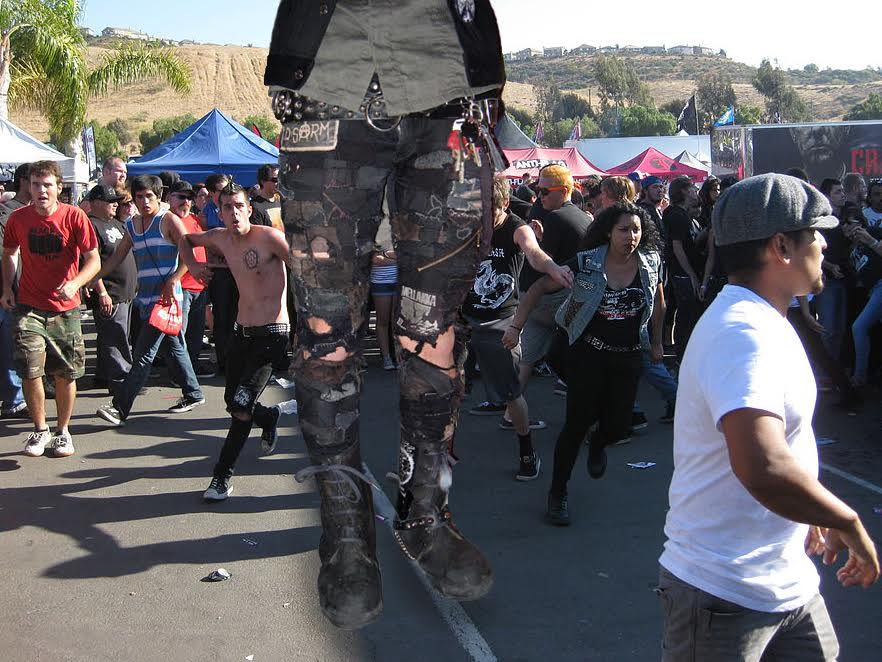 Burlington, VT – Megacrustaladon: A prehistoric ancestor to the modern Crust Punk was, in it’s time, the apex predator of the pit. A creature whose studded belt was known to reach eleven rows of pyramids with each stud measuring up to five inches in length. Its body odor could be smelled from a mile away, and just it’s dreads were taller than the Crust Punk we know today.

Once the king of the pit, the Megacrustaladon is now just a distant memory . . . or is it?

Rumors have been surfacing about sightings of Megacrustaladon in circle pits at shows all over the country. Sarah McArthur is one of the first people to come out and give an eyewitness account of what she saw.

“It was about three years ago at a Butt Slippage show. I was skanking in the circle pit with my friend and his brother. We had just locked arms with another couple, starting a five-deep skank, when out of nowhere something pushed us from behind knocking us and most of the people standing along the edge of the pit to the ground. The force was incredible, not even the biggest skinhead I’ve seen could create that force. Then I saw it, the Megacrustaladon,” McArthur said. “It was huge and I was horrified. It slammed away before anyone could get a picture, but we all saw it. Even ask the guys in Butt Slippage, they saw it too.”

According to oceanographer James Spencer, McArthur’s story — along with other stories of sightings — are nothing more than scene myths, and it’s impossible for the Megacrustaladon to exist in modern times.

“The North-Western Megacrustaladon hasn’t been alive since the early Reaganic era. Ever since the rising popularity of punk music in the Clintonsous era, circle pits simply haven’t been violent enough to sustain a healthy Megacrustaladon.”

Although there has been no definitive proof about it’s existence, there are still those out there who believe they will be able to find the elusive beast. Several expeditions have been made into pits in hopes that Megacrustaladon could be lured out with a 400oz bottle of malt liquor, but so far all attempts have proven unsuccessful.