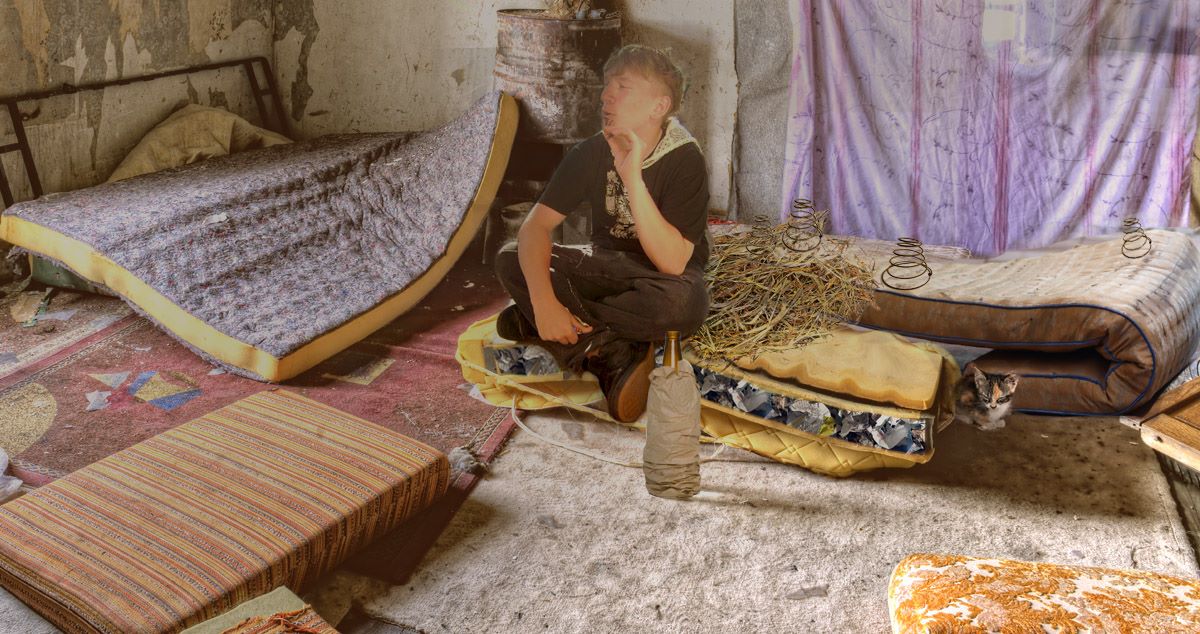 ALBUQUERQUE, N.M. – Because of his commitment to an anti-capitalist, anti-corporate, DIY lifestyle, local punk Aldo Medina has had many unique experiences. He’s protested the G8, been pepper sprayed by police, even train-hopped across five states. But friends report that his commitment to self-sustainability has led him to cobble together the shittiest, most uncomfortable mattress in the world.

Medina says he originally found a heavily stained sleeping bag behind a local Medical Emergency Clinic, noting “it was just back there by the dumpster. Some idiot was throwing it out and it didn’t look too bad, so I snagged it. I knew I could make it into something I would be proud to sleep on.”

Medina’s then-roommate, Carmine Lugo, has a different take on early stages of the mattress. “He said it didn’t look bad? Jesus. He found it behind some hospital, for fuck’s sake. It was so stained you couldn’t tell what color it was supposed to be. The thing is probably haunted.”

Over the past four years, Medina made several modifications to the mattress to avoid throwing it out. “I started by stuffing it with newspapers, and then when those get too soft I would throw in some packing peanuts. There was a day when my basement room flooded. The mattress soaked up a bunch of water and a lot of the insides turned to mush, so I used padding from an old piece-of-shit couch to reinforce it”

Lugo, to the surprise of none, again had an alternate view of what happened. “He ruined our couch, which was the only good piece of furniture left. Man, we used to have a cat. One day, no more cat. For all I know it is somewhere in that poor excuse of a mattress.”

But, despite the obvious biohazard and spine shredding construction, Medina says it’s “the only way to sleep. They’ll do whatever they can to force you onto the grid. And it all starts where you lay your head. Tempur-Pedic? Craftmatic? HA! My Sleep Number is 69! It’s all about freedom and knowing you’re not under systemic control. But I do admit, adding the springs was a bad idea, because those cut me up real bad the first night.”