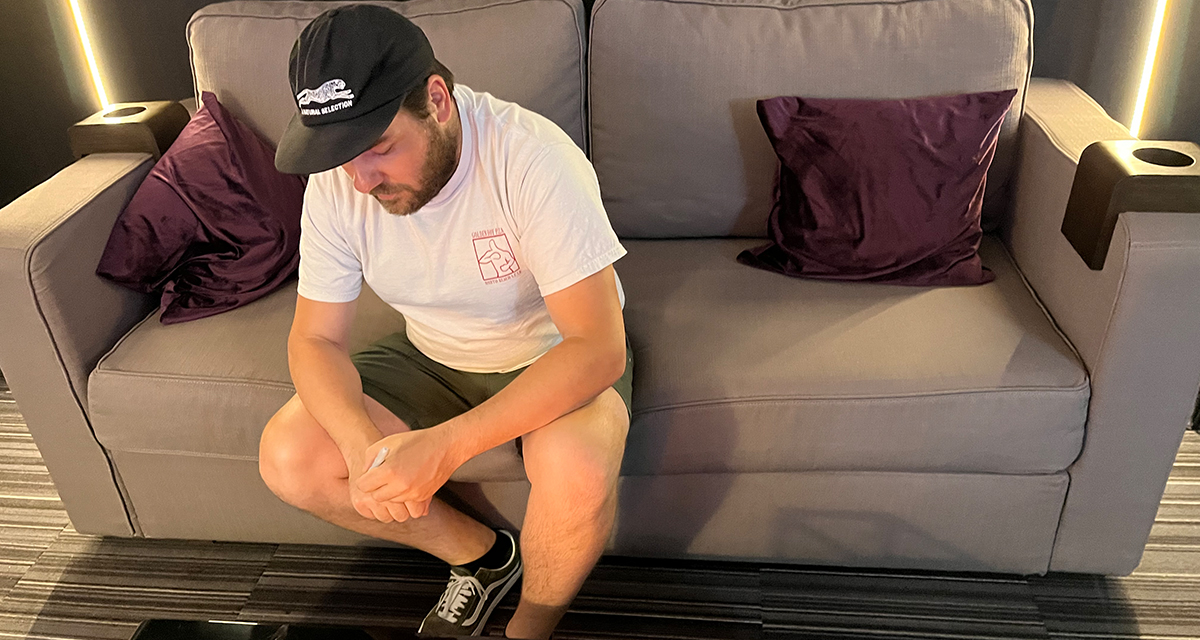 PHILADELPHIA — Local punk Andrew Fetzer attempted to deceive friends by crudely marking his hands with a sharpie to hide that he’s been relaxing at home and getting a healthy amount of shut-eye, worried witnesses report.

“I used to go out to shows all the time. They called me ‘Rowdy Andy,’ on account of all the rowdiness,” said Fetzer while weaning a comfortable pair of pajama pants and settling in for another episode of “Guy’s Grocery Games.” “Then as I got older, the loud noises and lack of comfortable seating really got to me. I found myself hoping the bands weren’t any good so I wouldn’t have to dance or applaud. Nowadays I just want to stay home, treat myself to some dark chocolate, and recharge my batteries. Sometimes if I’m feeling like I need to let ‘Rowdy Andy’ out I’ll put some music on my Bluetooth speaker, but I don’t want to disturb the neighbors.”

Friends have started to become suspicious of Fetzer’s nightly activities.

“Andrew tells me he’s been going out until 2 a.m. every night, but I often catch him fresh as a fucking daisy and in a good mood in the mornings. He pretends like he was at a show the night before by making a big scene of washing off the stamp on his hand, but it never looks right. It seems too fresh, like dark and wet, it even smudges when he shakes hands,” said friend Max Kemp. “It’s terrifying to think that one of my close buddies is getting three full REM cycles every night. Things got serious last week after I discovered a sleepy-time tea wrapper in his trash can. Oh God, I hope he hasn’t been getting into that stuff. Next thing you know he’ll be dropping melatonin gummies and waking up early to do yoga.”

Scene historian Bryan Carty believes this to be a common trend.

“We see it all the time– people feel shame for taking a step back so they lie. We’ve lost many greats to the tragedy of comfy couches,” said Carty. “It always starts small. First, they’ll recommend going to matinee shows. Then they’ll become more interested in the TV behind the bar with a random episode of ‘The Office’ on mute and say, ‘Oh man this is the one with Kevin’s chili.’ And finally, they’ll just lie. Others have lied in similar ways, like buying counterfeit paper wristbands, or faking tiredness with excessive yawning and tapping their mouth like a cartoon character.“

At press time, Fetzer was having custom rubber stamps made with the logos from every local bar.