Punk in Carhartt Averts Eyes, Sinks Into Seat After Waiter Asks if Carpenter in Building Amid Wobbly Chair Emergency 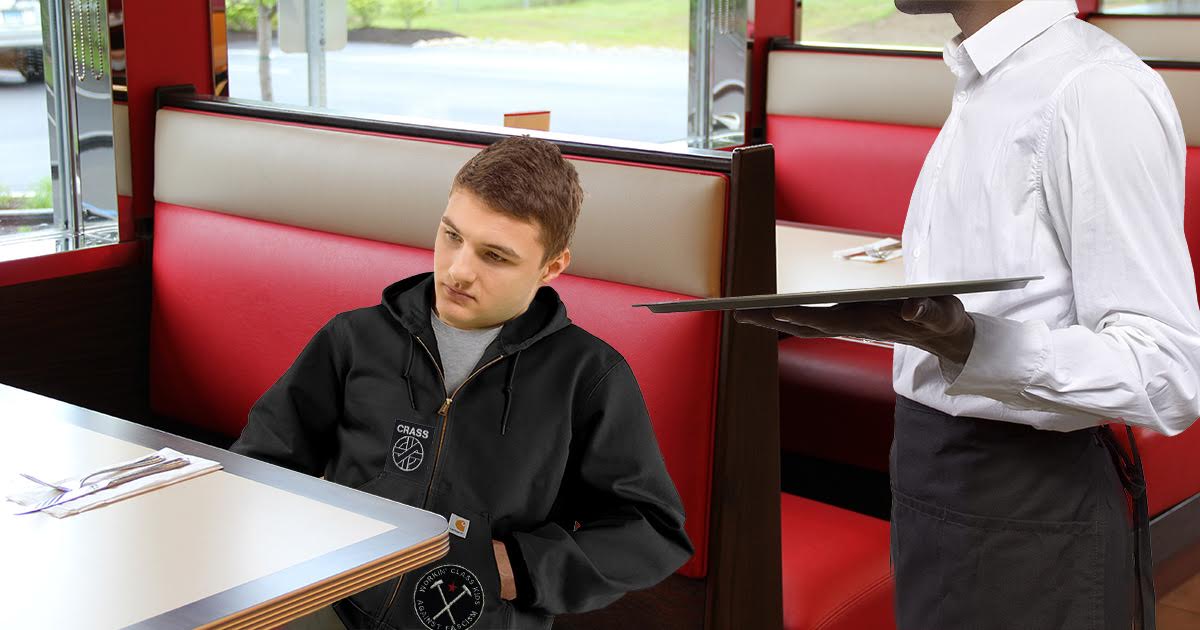 BUFFALO, N.Y. — Local punk and Carhartt jacket-wearing dilettante Anthony Lynch avoided eye contact with fellow diners at a restaurant last night after a waiter asked if there was a carpenter in the building following a sudden furniture emergency, according to appalled sources.

“All was normal and everyone was just enjoying their dinners when suddenly, it happened — a two-top in the corner started moving all wonky outta nowhere. The customers noticed immediately, and the husband started to panic,” recalled server Russ Darden. “I immediately yelled for help, asking if there was anyone in the building qualified to step in, and everyone’s eyes darted over to this young guy in a Carhartt, dirty jeans, and Timberland boots. Surely this guy just came from a day building a house or demolishing a giant wall or something. But he just waved us away and sank down in his chair.”

Eyewitnesses confirmed the display of cowardice on Lynch’s behalf, and were “just relieved that the waters on that table ended up making it, although it was a really close call.”

“We all saw him walk in with that jacket, and it was a nice one, believe me: weatherproofed, extra insulation, everything,” said fellow Denny’s patron and Tonawanda resident, Denise Vanhoose. “To let people assume you might know your way around a jigsaw or at least have a damn pocket knife, when you haven’t had so much as a splinter, is just plain wrong. I bet that kid’s never even snapped a chalk line before. I heard he has some computer job. What a disgrace.”

Experts on the subject of human psychological disorders said that the attention-seeking behavior shown by Lynch is not uncommon, although still despicable.

“We’ve all experimented with clothing popular outside of our immediate subcultural styles. But parading around as someone who might need rugged, yet not rigid, outerwear to protect him from the elements while on the job is not only insulting, it can have dangerous consequences,” said criminal psychologist, Dr. Davida Sumpter. “For the safety of our communities and the 20-year-old tables, warped lawn furniture, and loose steps found within them, it’s my professional opinion that Lynch and people like him should not be allowed in public, ever, or trusted with disposable income of any amount. A Carhartt doesn’t even keep you that warm outside unless you’re moving around in it, so save me the spiel about lake-effect winds.”

At press time, the dining room was heard cheering as the table crisis was averted after a 15-year-old busboy shoved a few wadded up napkins under the uneven leg.