Punk Embarrassed When Butt Flap Gets Stuck in Escalator 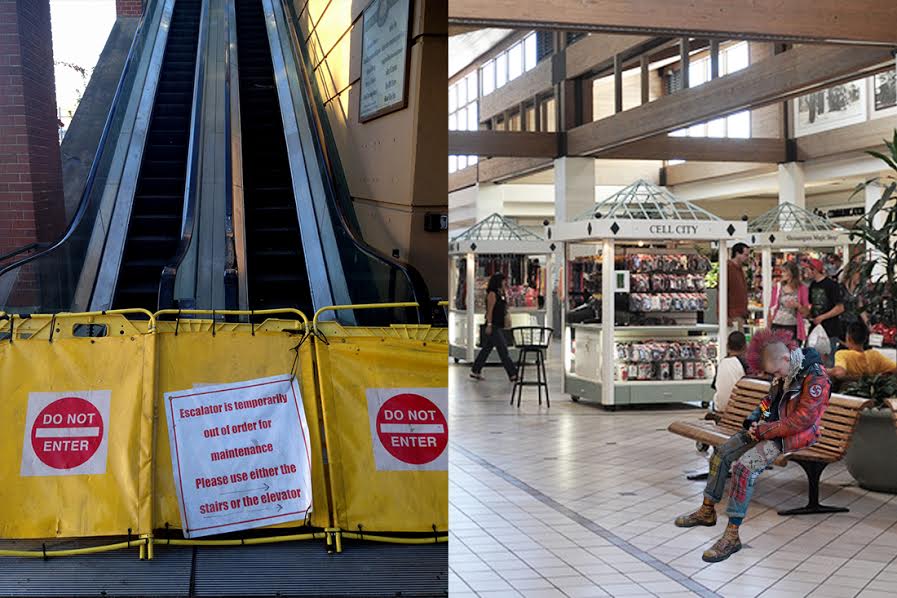 ATHENS, Ga. – Patrons of the Georgia Square Mall watched in horror as local punk Bobby Lamb was nearly pulled into a moving escalator when his unusually long butt flap had become snagged in the escalator’s retracting stairs.

“I came to the mall with my family just for a day of fun and shopping and, all of a sudden, this kid got stuck. It was almost a nightmare. Luckily enough, his Dropdead butt flap was long enough that he was able to casually walk to the emergency stop button,” mall patron Darren Wilkes said.

Lamb’s friends have often criticized his choice of extra long butt flap, saying that it tends to resemble a filthy version of a bridal train.

“He gets it stuck in bus doors all the time…car doors…he can’t even use a revolving door. But doors are the least of his problems now that escalators seem to dislike him,” Lamb’s best friend Mike Hall said.

Emergency medical responders were on the scene within minutes to help rescue Lamb from the escalator. Outfitted in hazmat suits to protect against the toxic stench of the filthy butt flap, the medical personnel were able to cut Lamb free.

Lamb made the almost fatal mistake of sewing the extra long fashion accessory into the belt-line of his pants. Thankfully for Lamb and everyone else on the escalator, the butt flap was long enough to allow Lamb to assess the situation as it happened and calmly take the necessary steps to shut down the escalator.

“When it first got stuck, I was really scared – I tried yanking it out, but it was only getting worse. If the butt flap had been 96 inches shorter, I would have been in a lot of trouble,” Lamb said, while recovering in the mall food court. “The worst part is the cute girl from Spencer Gifts saw me get stuck – I will never live that down.”