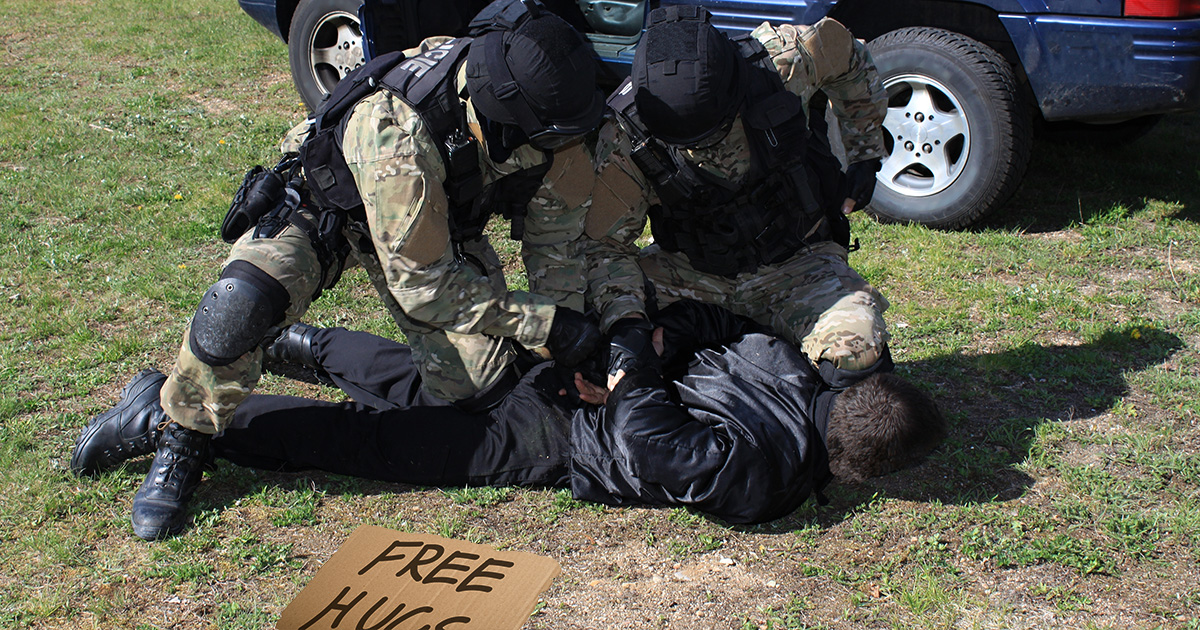 PHILADELPHIA — Protesters demanding an end to police brutality found themselves in an awkward situation today when they applauded riot police for mercilessly beating the guy holding a “free hugs” sign at the demonstration.

“Look, typically I oppose police violence in all its forms,” said local activist Amari Preston. “That being said, seeing that guy eat shit did put a smile on my face. I mean, I was ready to give him a lecture on what a serious issue we are up against, but the cops just did a way better job of that than I ever could have. And they used a lot of their pepper spray on him, so now we don’t have to worry that they’ll hit us with that bullshit for no reason.”

Witnesses considered intervening when they saw the sign-holding dolt approach heavily armed riot police in an ill-conceived attempt to ease tensions, but ultimately waited to see how things would play out.

“That ‘free hugs’ shit was cute like 10 years ago, but talk about missing the fucking point now,” said community organizer Aaliyah Lewis. “Oh, you thought you were helping? Guess what, dumbass, the solution isn’t for everyone to get along – it’s to impose accountability onto an unaccountable institution, and that’s not going to be achieved through kindness. All the hugs in the world aren’t going to prevent police from murdering people in the streets and getting away with it every fucking time.”

“I’m sure the full body cast he ends up in will feel sort of like a hug,” Lewis added. “Happy now, idiot?”

Lt. Vincent DiStefano was one of the officers on duty and the first to pummel the would-be unifier.

“I was getting ready to call for backup once the cell phone cameras started coming out, but then I heard the cheers,” said DiStefano. “We’ve been dealing with these agitators all year, but this is the first time I’ve felt a real sense of unity with them. It’s nice to know that even in these unprecedented times, we can put aside our differences, even if just for a moment, to enjoy the thorough beating of a complete dumbass.”

After beating the pacifist, police declared the event an unlawful assembly and fired more tear gas into the crowd than was used during the entire Battle of the Somme.