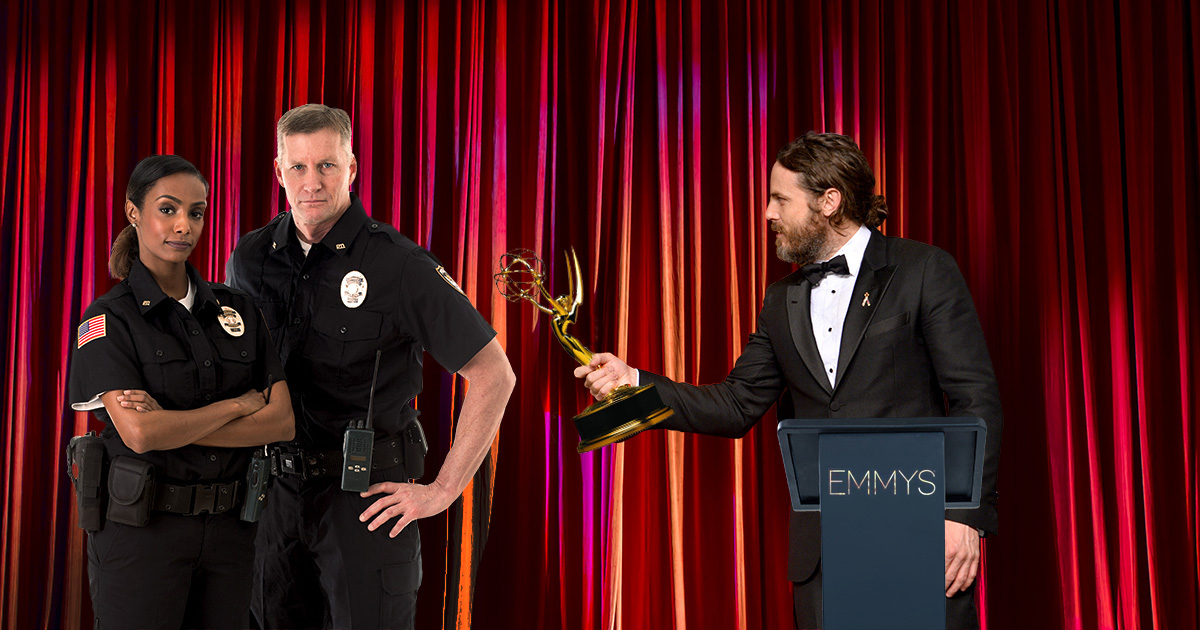 “There were so many deserving entries from other precincts from around the country, so I was honored even to be nominated,” sputtered Officer Jameson as he wiped away tears. “A lot of work went on behind the scenes to make this happen. I had to switch my body cam off and on at least a dozen times, all with my left hand. And this was a real high wire act. I made sure I lifted the hood of my squad car so there was no coverage from my dash cam. Thankfully, I have had a lot of training when it comes to manipulating my equipment to suit the needs of my department.”

Academy member Amos Pfeiffer was one of the leading advocates for the footage that ends with a civilian lying bloody and dead in front of a liquor store.

“Some of my colleagues were skeptical at first, because the end product seemed a bit choppy,” explained Pfeiffer. “But I convinced them that they were witnessing brilliant, tension-filled television like we have never seen before. Officer Jameson shows up on the scene, talks to a man, and then a scuffle ensues. After 45 seconds of blank space, we see the civilian is dead on the ground. This was a very artistic endeavor, because we are forced to fill in the gaps with our imagination. Found footage catches a lot of flack these days, but it shouldn’t, especially in this case where the authenticity lends to the suspense. This makes ‘The Blair Witch Project’ and ‘Paranormal Activity’ look like ‘Ratatouille,’ in my opinion.”

Tina Alvarez, an Indianapolis resident who caught the act in person and watched the award show, shook her head in disgust.

“I find it gross that this butchered clip ended up getting so many accolades,” said Alvarez. “I filmed all 7 minutes of the incident, but it gets rejected everywhere I try to submit it. Awards don’t matter to me, I just want someone, anyone, to watch this whole video and see that the officer intentionally murdered an innocent man. But instead I get members of the police department driving by my house very slowly every two hours.”

After receiving the award, Officer Jameson announced he would be conducting workshops at precincts across the country to train fellow officers in the best “on the fly” video editing techniques.