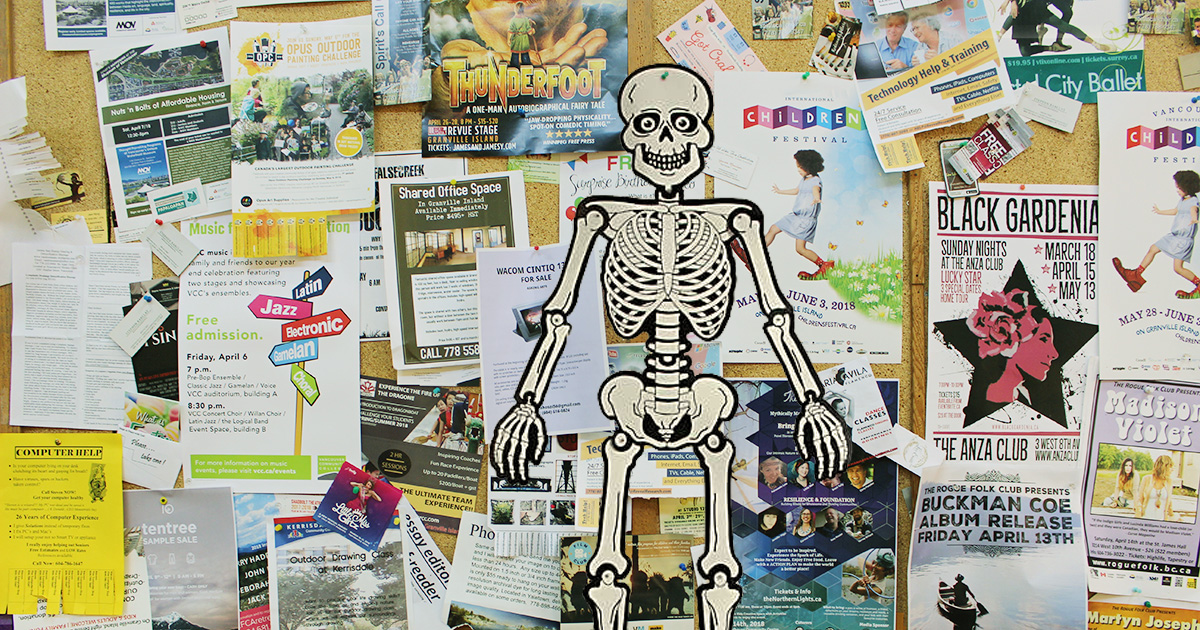 GARY, Ind. — Local librarian Kate Frazier announced earlier today that a paper skeleton will headline the Halloween decorations on the bulletin board next to the bathrooms this year, local sources confirmed.

“We’re very excited to be working with the paper skeleton,” said Frazier while stapling a construction-paper drawing of a pumpkin to the venue. “It’s professional, highly talented, and more than capable of giving fans the board they deserve. And the bulletin board’s cred instantly shot up, going from a normal place to learn about poetry readings to a very spooky place to learn about poetry readings.”

The announcement comes after months of speculation by fans of the library’s Halloween bulletin board decorations.

“Lots of people thought the board would be headlined by one of those dumb minions from ‘Despicable Me’ wearing a Frankenstein costume. That would’ve been a tough pill to swallow — the paper skeleton has put in the time; it deserves this,” said Todd James, an avid fan of the library’s bulletin board. “The skeleton worked its way up from the janitor’s closet door all the way to the front window… and last year, it was at the end of the DVD aisle. Plus, minions have nothing to do with Halloween. If they put one on the board, I would’ve set myself on fire.”

While the announcement was met with praise by most, some critics argued that choosing a paper skeleton to headline the bulletin board would be a mistake.

“The skeleton seems like such a safe choice. I want the patrons of this library to be terrified every time they walk past that cork board,” said concerned parent Phil Rossiter. “All a paper skeleton makes me feel is self-conscious about my poor calcium intake.”

For its part, the paper skeleton was humbled to be hung in such a prestigious location.

“It truly is an honor to work with Frazier and the rest of the Gary Public Library team,” said the paper skeleton, whose deep voice and ghastly movements made everyone within earshot vomit instantly. “Next year, I hope I can get some of my friends up here with me — like the weird, cobweb stuff that always falls off, a very happy jack-o-lantern, or even the black cat silhouette.”