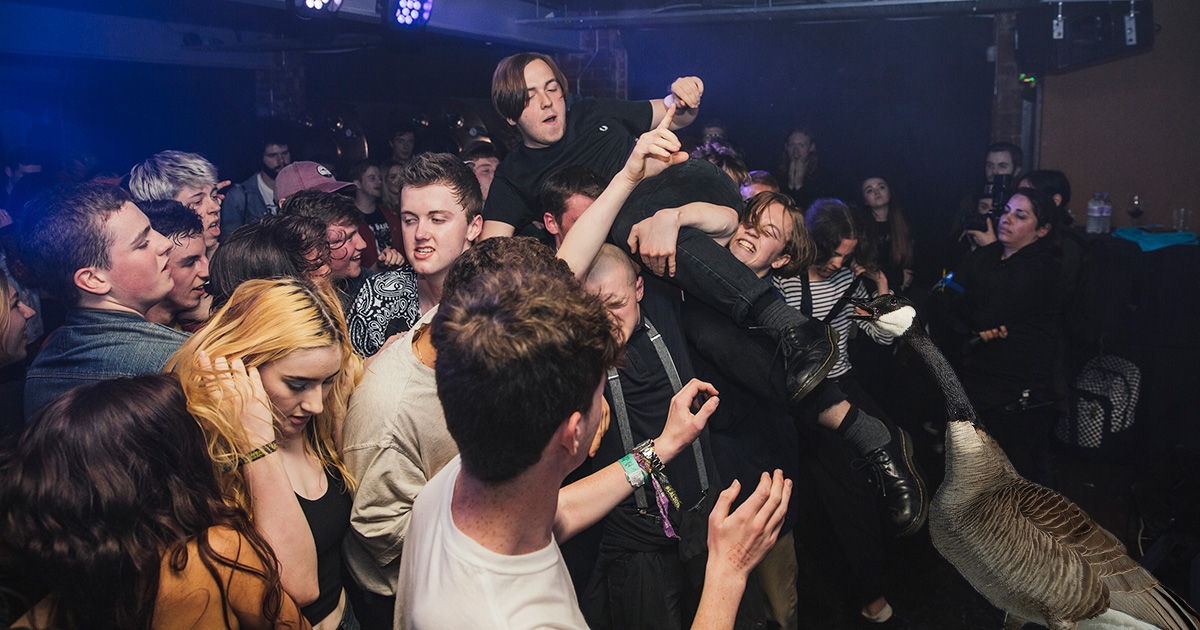 AKRON, Ohio — Legendary punk venue The Broken Bottle was evacuated late Saturday night after nobody confronted the Canada goose that landed in the pit on its flight north for the summer, horrified witnesses confirmed.

“Look, I’ve had my teeth knocked out, my ankle broken, and I’ve chased Nazis out of that club,” scene veteran Gabe Watts told reporters. “But as soon as that thing hissed at me, there was no way in hell I was going to fuck with it. When it flapped its wings, it sounded like Satan himself was about to sweep me down into hell.”

While some brave souls tried to shoo the goose by throwing their empty cans as they ran away, bartender Brian Reese reportedly pushed gently at the goose with a broom from behind the bar — which seemed to only enrage the creature.

“I don’t want anyone losing life or limb,” said club owner Donna Schlegel. “I’m used to pushing in dislocated shoulders and giving emergency tourniquets, but no one should have to tango with a goose hell-bent on destruction. We’re here to have fun.”

Allegedly, two bands waiting backstage came out to see the commotion, only to immediately retreat to the safety of their tour vans and cancel their sets. CeCe Kano, bassist of headliner Electric Lurker, witnessed the panic firsthand.

“I’ve never seen a pit clear out that fast — not when cops show up, not when an amp blows. Never. Last time we played here, a family of ducks crossed through the pit,” said Kano. “What is it with this place and waterfowl?”

Akron City Animal Control was called to help remove the animal, but reportedly refused to help the club.

“Simply stated, that place is fucked,” said a city representative who asked to remain anonymous. “We are not going to put any of our employees in the line of fire so some kids can slamdance to ‘kill your mother’ music. Right now, the entire downtown waterfront is closed off to the public because another Canada goose is guarding some eggs, and it is unsafe for any living being to be within a mile radius. If we’re not touching that, we’re certainly not helping here.”

Management later announced that the Broken Bottle will be closed until the goose leaves on its own accord, or they have to burn the place to the ground, “whatever comes first.”