Punk Clears Out Pit to Make Room for Crossing Ducklings 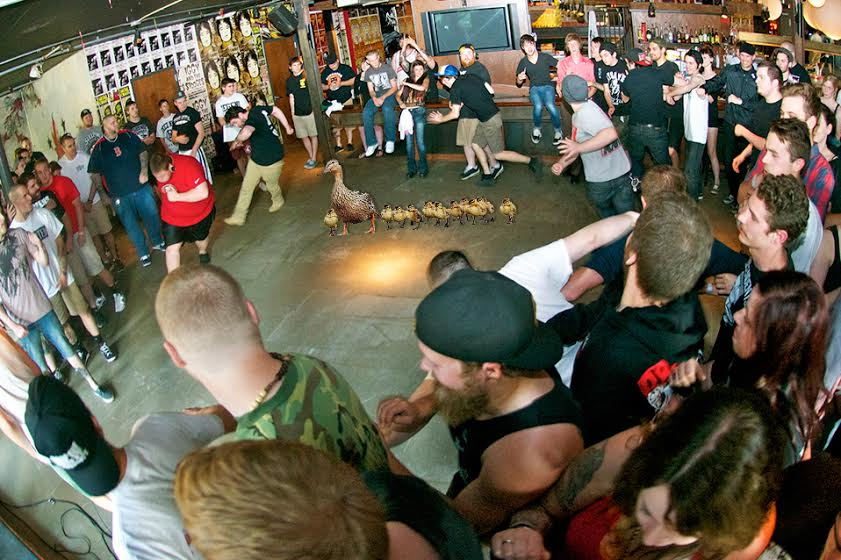 AKRON, Ohio — Local punk Paul Vanslyke is being called a hero after he weathered a showering of beer, boos, and fists on while clearing out the center of a mosh pit to protect a brood of ducklings crossing the venue in search of a nearby pond, according to reports.

“I mean, we just finished our first song, and as I’m tuning this guy is just crashing into people, spilling drinks,” said CeCe Kano, bassist of opening band Electric Lurker, who was one of the first to notice the altruistic behavior. “And he just kept screaming, ‘Open this shit up, mother fuckers!’ At first, I was thinking, ‘Dick move, guy.’ Of course, that changed when I heard the quacking.”

Witnesses confirm the distressed mother duck and her five ducklings sought safe crossing to their nest at a small pond just to the right of the stage.

“Look, I don’t care if you’re human or waterfowl. I am here to help the helpless,” said Vanslyke after the show, sitting on the stage and feeding the ducklings pieces of old hot dog buns. “None of these other posers with their Hot Topic haircuts could take 10 seconds to quit scrolling through Tumblr to help these adorable animals. THAT is problematic.”

Many of those in attendance admired Vanslyke’s quick thinking and pit boss antics.

“When I see some hoss out there throwing himself around between songs, it’s like, ‘Who is this jerkoff?'” said Mike Dixon, one of many in the crowd shoved by Vanslyke. “But then I saw those cute ducks timidly walk out across the pit while this dude in a flannel windmilled into people and yelled, ‘Yeah, fucking right, get it goin’! Quack! Quack!’ That was a really beautiful moment.”

Vanslyke, on the other hand, downplayed his gallant display of kindness and potentially litigious behavior.

“You never know what could happen,” said Vanslyke when pressed for statement regarding potential injuries to fellow showgoers. “There are ducks here now. You gotta be aware, or, yeah, you’re gonna get hurt.”

Venue owner Donna Schlegel may have summed up the evening best.

“The leak in the roof has only been getting worse,” Schlegel said. “It rained pretty hard last week and there is a good-sized pond right by the PA and now I guess a family of fucking ducks lives in it. Between them and the skunks in the basement this place is turning into a damn petting zoo.”