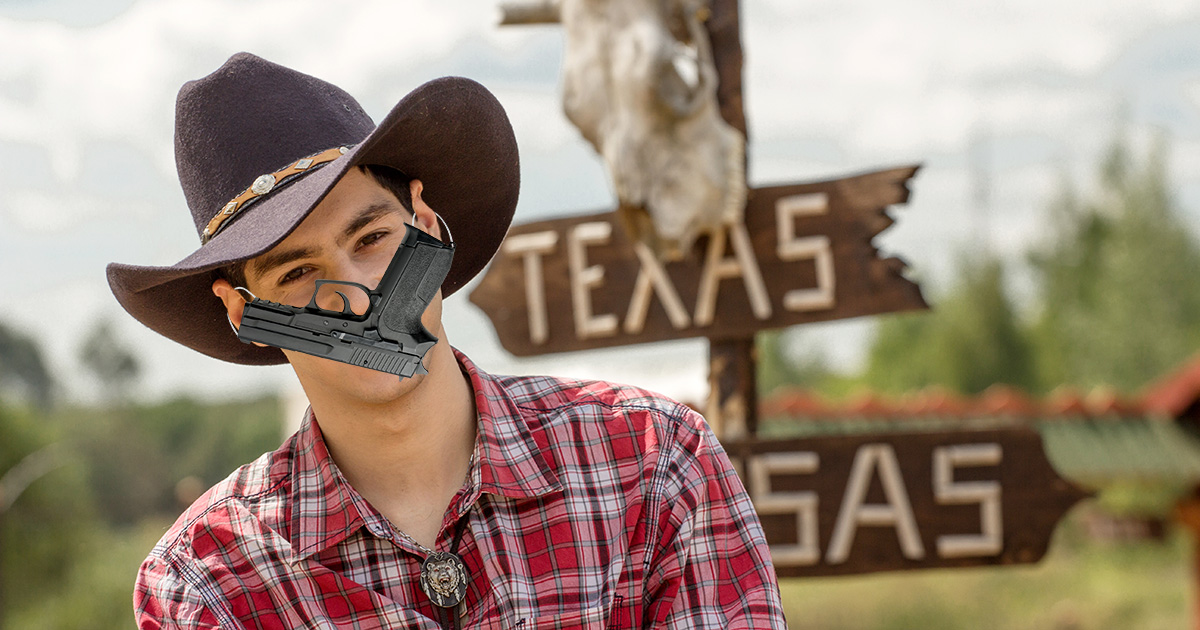 AUSTIN, Texas — Gov. Greg Abbott signed a new, statewide law today that would mandate each Texan to do their part to stop the spread of COVID-19 by wearing a mask that also keeps family and loved ones safe by lethal force.

“Texans are resilient. Texans are strong. Most importantly, though, Texans are armed at all times, and we need to let COVID-19 know that,” said Abbott from the state capitol building. “This new mask order is so we can get back to normal — we want people working again, and the sooner this virus is defeated, the sooner we can return to that Texas way of life. But also, these masks will be a deterrent to any violent criminals who think they can infringe on our liberties and freedoms as Americans.”

Texans admitted they had mixed feelings about the mask requirements.

“Don’t get me wrong, I love the gun part. I’ve been wanting to strap a gun to my eyeglasses for years just so I could shoot exactly what I was looking at, but people always said I was crazy. I know having a face gun is something most Texans would support,” said Shamrock resident Tad Tribauld. “But I just think of all the dangerous elements that masks bring: I could be breathing in my own carbon monoxide; that stuff kills people. Plus, I’m known to tip my hat and smile at every pretty little lady that walks by, and if they can’t see my mouth, how are they going to know I’m wishing them a good day?”

Gun control advocates were appalled by the order.

“The last thing we need is more guns on the street… especially since this new mask order is for anyone over the age of 10. So now we’re going to have teens and tweens with loaded guns in their mouths? I don’t see who that’s helping,” said gun safety activist Sammi Pacheco. “Sure, this new law will almost definitely reduce the number of coronavirus cases, but just wait and see how many people go to the ER because someone yawned and the gun mask shot them in the leg.”

Abbott is also expected to sign an executive order to fund more PPE for hospitals, which will be spent exclusively on handguns and other self-defense weapons.