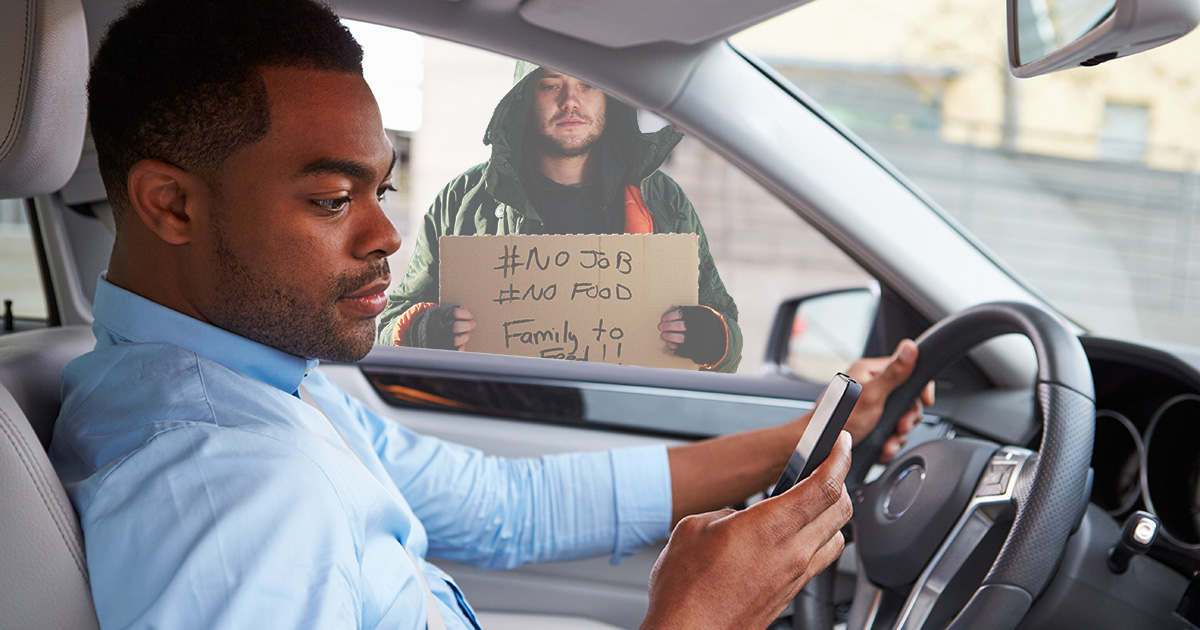 “Most drivers will give me a shake of the head or try to avoid eye contact for a little bit, but they finally give in and either mouth “sorry” to me or slide a dollar out their window,” Moore said while walking between rows of cars near an exit around Atlanta’s famed Spaghetti Junction. “But this dude, he just looked down at his phone like he was answering the most important email in the world. At one point he was looking at LinkedIn, that’s how desperate he was not to acknowledge my existence. I had no choice but to just stare into his window until the light turned.”

The driver of the vehicle, however, didn’t see anything wrong with his actions.

“I check my phone when I am at a stoplight so I don’t do it while I drive. It’s a safe practice. I didn’t even see the guy you’re talking about,” Hoffman said. “But if it is that same dude with the dreadlocks that’s there every day, he sure is young looking to be a ‘Vietnam veteran’ and he’s been ‘stranded in Atlanta’ for quite some time now. If he had any business acumen at all, he’d know that trying to stare me down for cash is less lucrative than trying to hit up the seven cars behind me once he realized my non-verbal communication expressed that I would not be giving him or anyone else any of my hard-earned money.”

“From the sidewalk to the boardroom, sometimes two parties cannot come to an agreement. I’ve seen millionaires pretend to get a phone call from their mother, walk out of a conference room, and just never come back,” Gutierrez said. “And I’ve seen another millionaire chase others down and literally tackle them from behind to get them to agree to terms. Although, I do find it interesting that Mr. Moore has an ‘Accepts Square’ sticker at the bottom of his sign. Convenience is key in any trade scenario.”

As of press time, Moore had decided to just skip Tesla’s all together, as well as any car with TRUMP2024 bumper stickers for safety’s sake.