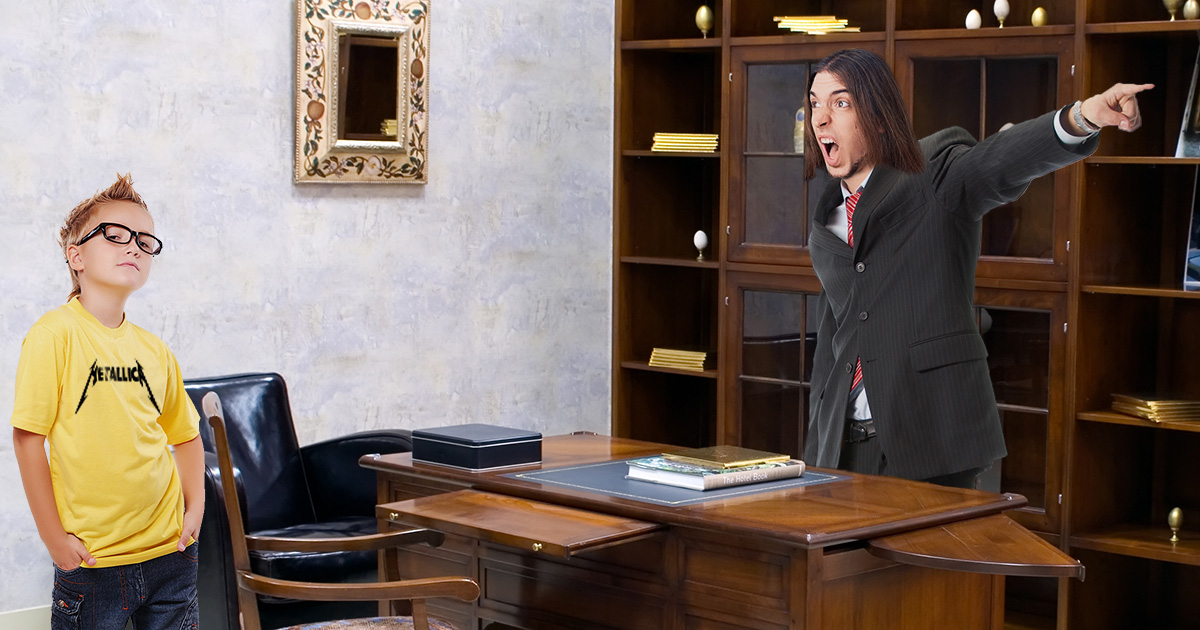 “It’s unacceptable,” said Donnavin, sporting a Pig Destroyer shirt featuring a demonic creature eating it’s own flesh. “He comes back to school from a long Covid break, and he’s wearing a Metallica shirt that just has the band’s name on it? You kidding me? In my school, if you want to wear a metal band T-shirt, there better be swears, or tits, or at least a skull — bare minimum, a logo you can’t read because the font is all fucked up.”

Ramirez admitted this was not the first time Donnavin asked him to change his shirt or go home.

“Principal Donnavin saw me wearing a plain AC/DC shirt last year, and he brought me into his office so he could show me more offensive designs I could buy,” said Ramirez. “He really wanted me to get this Cattle Decapitation shirt that read, ‘Forced Gender Reassignment,’ and he wrote me a note to give my parents that they should buy it for me.”

“No way I gave them that note!” he added. “I’m not going to ask my parents to buy me a shirt with dicks getting cut off on it!”

While many educators across America have been preoccupied with keeping their students and staff safe due to COVID-19, students say Donnavin’s biggest focus since returning has been metal T-shirt content.

“I straight up wanted to get sent home, so I wore my Integrity shirt with Charles Manson on the front the first day back at school,” said 9th grader Jake Simpson. “But Principal Donnavin asked me where he could get the same shirt… and when I told him, he made me student of the month! I was all worried about wearing my Cock and Ball Torture shirt to school, but now I think it might get me extra credit.”