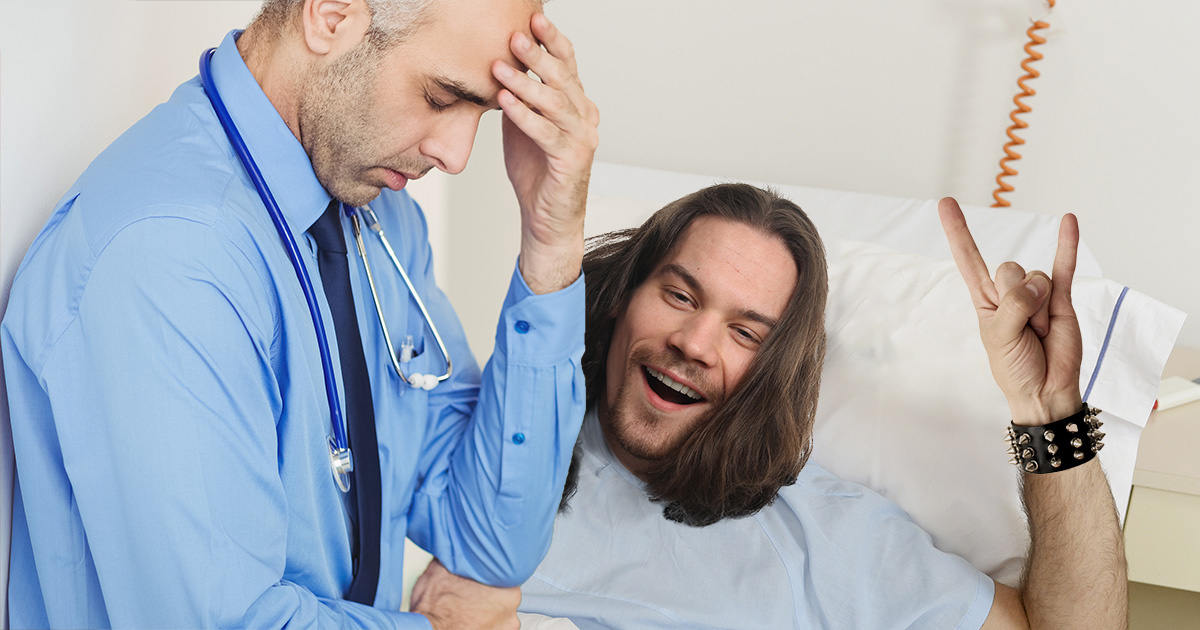 “When my doctor told me about spinocerebellar ataxia, right away I thought of super gnarly lyrics about ripping out a spine and replacing it with bags of pus and maggots,” said Matthewson. “And when she said stuff like ‘degenerative’ and ‘incurable,’ I just kept thinking about how it sounds like something a fucked up alien would drill into your brain while probing you with burning logs from a tree made of bones.”

“Telling someone that they will soon pass away is one of the hardest parts of being a doctor — we like to make sure they’re comfortable, and that they have loved ones with them for support,” said Dr. Dawkins. “But Mr. Matthewson thanked me for curing his ‘writer’s block,’ which I had to explain to him wasn’t a medical condition. Every symptom I mentioned, he just gave me that heavy metal hand gesture. I’m sorry if this comes off as crass, but his internal organs are in the condition of someone who’s been drinking battery acid… which also seemed to excite him. Wherever you can find silver linings, take them, I suppose.”

Matthewson’s bandmates assure that this level of optimism is standard for the singer.

“Alec’s a half-glass-full kind of guy… especially when that glass has whisky and paint thinner, which is his favorite drink,” said bassist Darren McManus. “When we were on tour and hit a deer, it was his idea to eat the venison. And then when he got stomach worms from it, it was his idea to name our new album ‘Parasitic Roundworm.’ He’s probably going to come up with a two-disc concept album from this disease. But judging by the prognosis, he’ll also probably die before the end of the week.”

Matthewson has also encouraged his bandmates to book doctor’s appointments, certain that his drummer’s mouth fungus is “good for one song, at the very least.”