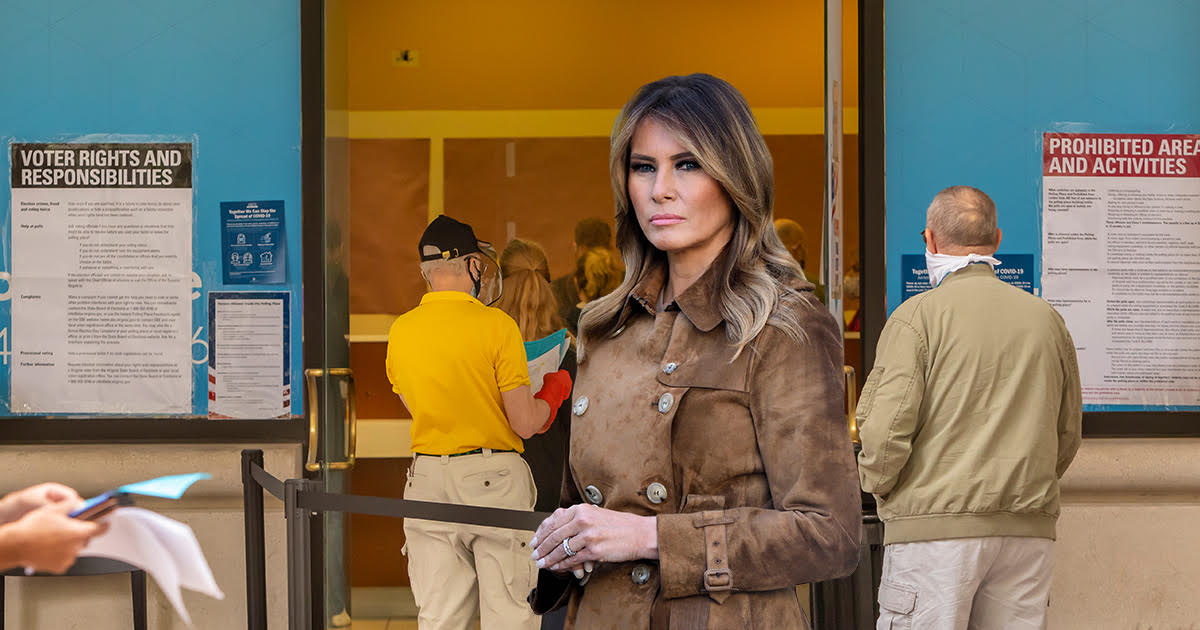 “I’d heard the President’s bluster about voter fraud and people illegally messing with the election results, but I never really bought into it,” said poll worker Alan Potter, who discovered Ms. Trump stuffing the box. “That’s why I was so surprised when I looked out the window and I saw a woman wearing a $10,000 fur coat hurriedly shoving a pickup truck’s worth of ballots into a ballot drop box — you can imagine the shock when I looked into her stony, Medusa face and realized it was Melania. She told me that in exchange, she’d cut me in on some of her ‘hush money allowance’ that Donald gives her every month.”

The First Lady defended her actions as those of a desperate woman.

“I can’t fucking take it anymore, O.K.? When I married Donald, I was just looking for a sugar daddy. I never expected I’d have to do all this FLOTUS shit,” said an exasperated Melania. “They make me stand up to online bullies. Why? I find them hilarious. And I don’t really care about those elaborate White House Christmas decorations, do you? I tried to do such a bad job the first time around that they’d never have me do them again. Can you imagine having to do this another five times? Please, just shoot me now.”

President Trump defended his wife’s actions, despite them actively hurting his struggling campaign.

“Look, it’s very simple: I said there would be voter fraud, and there was voter fraud, O.K.? The Democrats tried to say it wouldn’t happen — it did. So much tampering it makes your head spin,” said President Trump. “Melania loves being the First Lady. Sure, I find her hiding in the Lincoln bedroom crying most nights, but I think it’s because she’s so happy to be with me. Besides, it’s total fake news from Nancy Pelosi and Sleepy Chuck Schumer that she would ever do anything to stop me from winning. You see the way she looks at me — she loves me and only wants the best for us.”

Melania allegedly now has several lawyers looking for mistakes in her naturalization paperwork that could get her forcibly deported back to Slovenia.