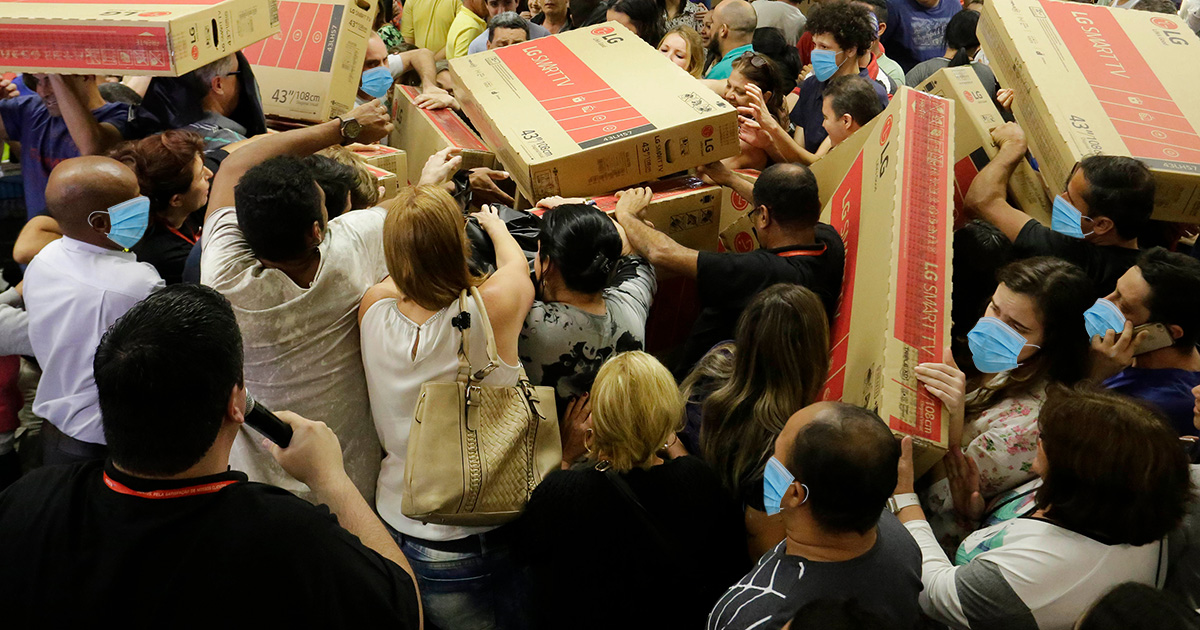 GRESHAM, Ore. — Local bargain hunter Terry Hodges was relieved to discover that the writhing, chaotic mass of humanity trampling him in order to procure a premium HDTV this morning were all masked, the man confirmed while struggling for air.

“You know, it’s just nice to see people being responsible now that COVID numbers are starting to climb again,” said Hodges while his spine was being rearranged under the weight of the mob. “It’s tough to maintain social distance in crowds like this. It gave me some peace of mind to see that everyone threatening the store employees were wearing facial coverings. Now I just need to wait for the rush of people to stop so I can try to secure a surround sound setup and try to get help for my badly broken legs.”

Best Buy manager Pam Farmer was one of the few people to try to save Hodges, but ultimately had to back off.

“As soon as we opened the doors I saw him and a few dozen other people run up to our hand sanitizing station, and after he got a squirt of Purell he, unfortunately, tripped over a decorative mini Christmas tree and the crowd overwhelmed the front lobby of the store. He was lost after that point,” said Farmer while loading a shotgun in order to fire warning shots in the air. “I heard him screaming about online reservations, and a digital voucher while he was being trampled, but that stopped relatively quickly. I expect him to be full smashed into the carpet by the time the frenzy dies down.”

A spokesperson for Amazon believes the best way to stay safe from the virus is to avoid Black Friday sales and focus on Cyber Monday deals.

“Look, when you’re shopping at home the only thing you have to worry about is what you’re going to buy with all the money you save shopping,” said Amazon Director Edith W. Cooper. “Brick and mortar retailers are trying to get you killed. That mom and pop store in your cute little downtown area wants to give you COVID and they want to see you crushed by your neighbors while you fight over the last Harry Potter Lego playset because it’s free advertising for them. At Amazon; we care. Just tell Alexa what you need and never leave home again.”

At press time, EMTs were desperately trying to revive Hodges so store employees could enroll his battered carcass in the Best Buy rewards program.