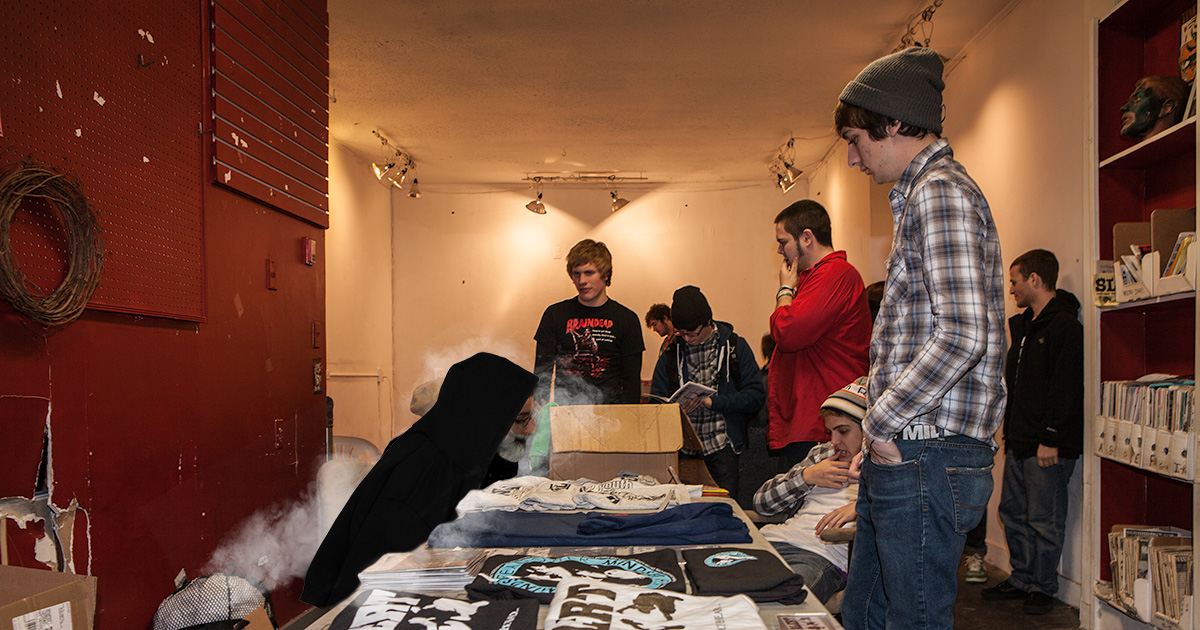 TOPEKA, Kan. — Local punk Ryan Brewer was doomed Thursday night to wander the earth as a merch guy until he can find a replacement following his failed attempt to steal a T-shirt from a merch table, as prophesied by an ancient curse and confirmed by several eyewitnesses.

“I can’t believe this shit,” said Brewer from behind a folding table, overflowing with poorly folded hoodies and a vinyl EP doubling as a drink coaster. “The merch guy caught me swiping a shirt, and all of a sudden — boom! I was instantly transported to the other side of the cash box… and somehow we’re out of tens, fives, and singles.”

Witnesses identified Fred Atkinson as the now-former merch guy who caught Brewer, thereby allowing Atkinson to escape his own hellish punishment. After the transformation, Atkinson told Brewer that, as his successor, he’d spend his days trapped as the merch guy until passing on the curse by catching a thief himself.

“I was stuck back there since 1988, when I was at a Gorilla Biscuits show and tried snagging a copy of Start Today. I had a future ahead of me — I was going to be somebody. And then, I got cursed to roam the earth asking for tips at punk shows,” said the newly released Atkinson. “It was torture. I did everything in my power to encourage stealing: I left open boxes all over the place, I took 20-minute cigarette breaks… even perpetually rolling my eyes at potential customers and pointing to a half-hidden sign that read ‘CASHIER’S CHECKS ONLY.’ Nothing worked.”

Security footage showed an instantaneous transformation, which witnesses say was accompanied only by a barely audible whooshing sound.

Brewer’s existential damnation as the merch guy for punk band Wheelchair Pervert reportedly caught some of the band by surprise. Members who were not aware that Atkinson’s employment was a form of metaphysical slavery claimed they would miss his trademark surly personality.

“I guess that’s why it looked like he never, ever gave a damn about selling any of our stuff,” guitarist Owen Marks said of Atkinson. “Turns out, he was just desperately trying to free himself from his own personal hell. That must be why he slept through our set every night.”