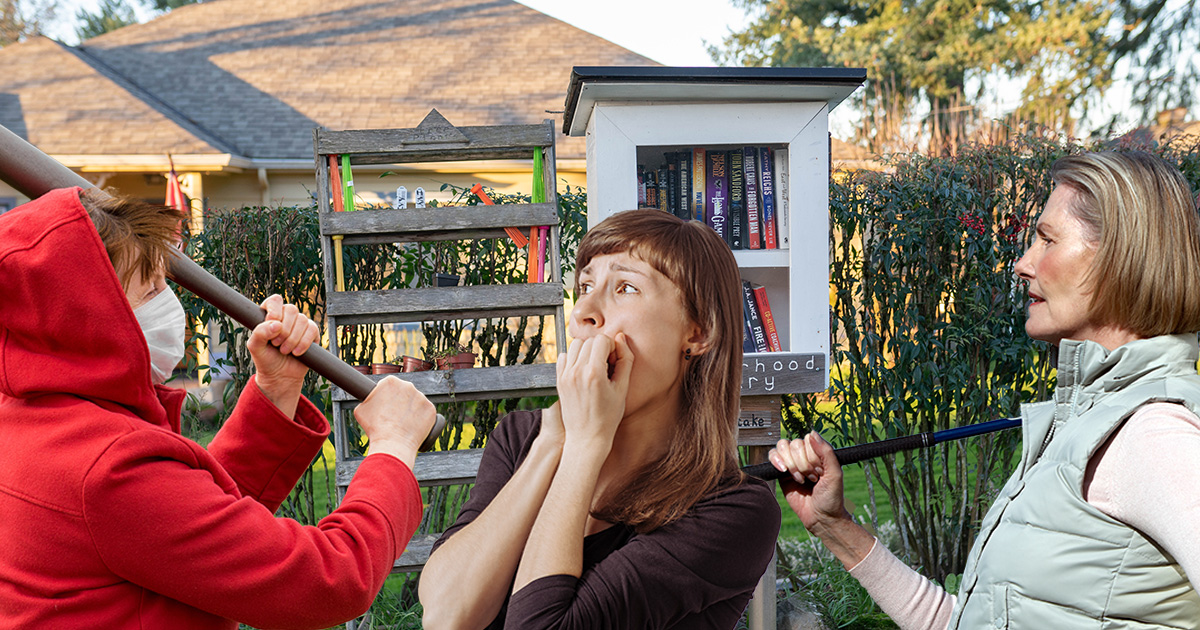 COLLINGSWOOD, N.J. — A local gang of librarians are accused of assaulting homeowner Jessica Wheatley over the installation of a “little free library” on her front lawn.

“I just thought it’d be a nice way to connect with my neighbors and share some of my old books. What I didn’t expect was a gaggle of blue hairs wearing chained bifocals busting up my twee little book depository with a Louisville Slugger,” said Wheatley. “Naturally, I ran out and asked them what the hell they were doing, but that’s when the big lady screamed “you fucked with the wrong civil servants, motherfucker” before they held me down and took turns wailing on my kneecaps with a leatherbound copy of ‘The Brothers Karamazov.’”

Although feigning sympathy, local librarian Adeline Amato was adamant that these accusations are false.

“I don’t know nothin’ about that. As I hear it she had a fall trying to grab a book from the top shelf of a rolling library ladder. All I knows is, people that pay off their late fees and don’t try to horn in on our business ain’t got nothin’ to worry about,” said Amato. “But this idea that us librarians are nothin’ but violent thugs is a hurtful stereotype. You might not like hearin’ this, but neighborhoods need us for protection. Primarily protection from illiteracy. Plus, as a place for homeless people to go number two. Me personally? I don’t wanna hurt nobody. But Evelyn standing menacingly behind me here? She’d love nothing more than to see you sleeping with the microfiches, capisce?

“For over three years I had gone undercover as a 67-year-old retired teaching assistant volunteering to help this so-called ‘Librarian Mafia’ digitize their periodicals. What I found was shocking,” said Schwyberg. “Apparently, their illicit operation is funded by a street tax that they collect under threat of fine or jail time. And they’re not even the only gang in time. There’s the sanitation worker mob, the firefighter mob, and who could forget those cruel sons of bitches in the public school teacher syndicate.”

Sadly, Schwyberg has gone missing since this interview, however, detectives may have found one of the reporter’s fingers within the local library’s Dewey decimal system, filed under “R” for “rat.”