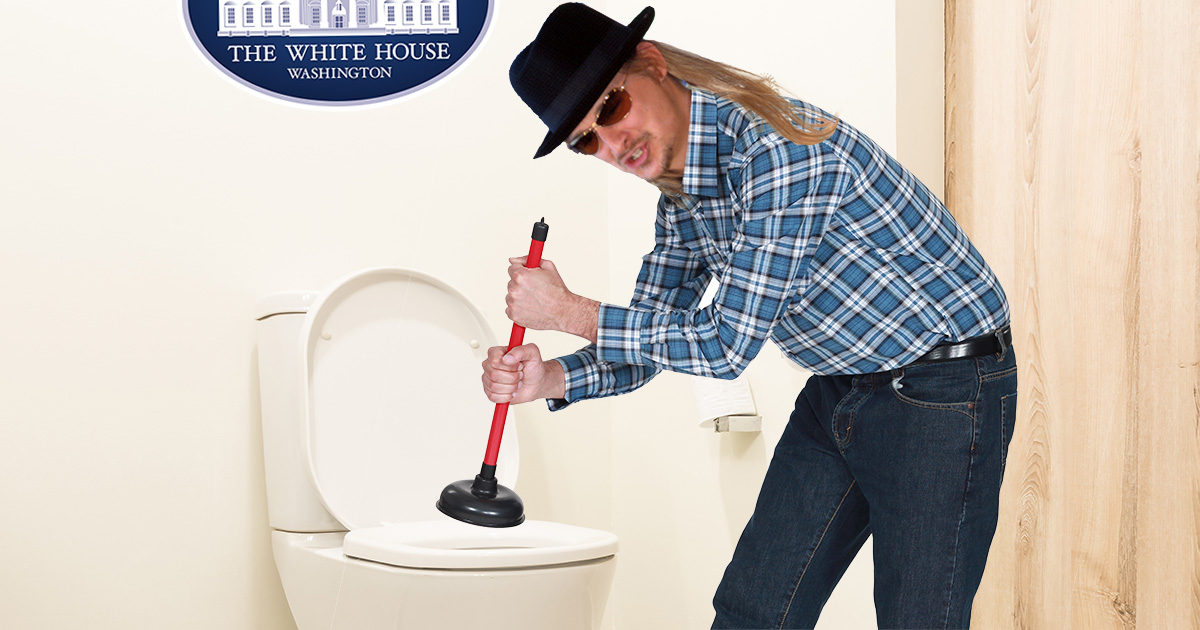 WASHINGTON — ‘90s rap-rock icon Kid Rock is currently having a full blown panic attack after “dropping a major league deuce” and clogging the toilet in the White House’s Oval Office.

“I was cruising around D.C. when the Five Guys I had earlier started knocking on the backdoor and I needed to find a crapper, pronto. Then I remembered Trump said I could stop by the White House anytime,” explained Kid Rock in a hushed, exasperated tone. “I knew Donny would probably be down in Florida golfing, but I figured I could pop in, drop the kids off at the pool, and get back on the road. That fucker felt like I let loose a full Joe C. — it was so big, made me miss the little guy. But next thing you know, I’m staring in absolute horror as my own turd is rising up out of the toilet and on to the floor. ”

“Where the hell is a plunger?” Rock added.

“The Oval Office restroom rarely gets used because Trump wears adult diapers, so you can imagine my surprise when water flowed out from under the bathroom door,” said James. “I kept telling Trump’s staffers that so-called ‘flushable’ wipes would wreck these old pipes, but of course no one listened to me. I gently knocked, expecting the First Lady — or more likely, Attorney General Barr — but I found the ‘Bawitdaba’ guy cursing out some ‘stupod poop.’ I wish I could say this is the first time it’s happened.”

“President Trump, who is incredibly unselfish and wise, offers each and every one of his friends free use of the White House facilities,” said Luna. “It’s why we had Roseanne Barr sleeping on a couch for a few weeks in the Center Hall… and why Kanye West once showed up at 3 a.m. with a Maglite and a Ouija board, insisting he can exorcise Mary Todd’s ghost from the Lincoln Bedroom.”