Hardcore Kid Tried as an Adult 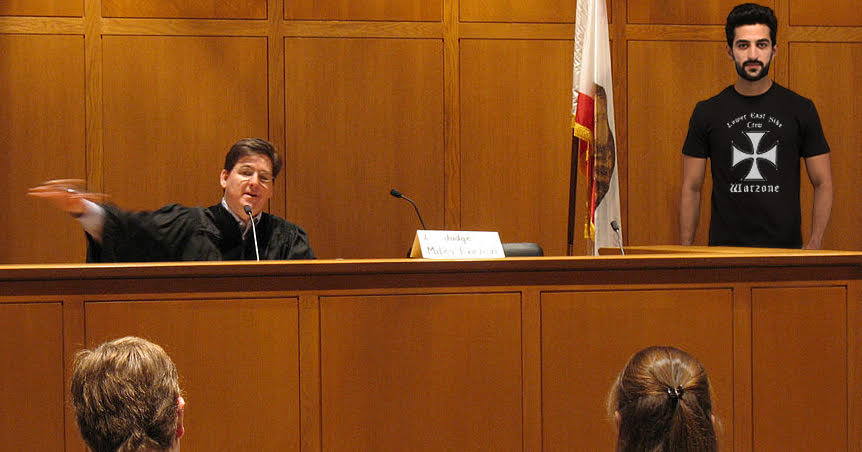 “As you can see, Your Honor, my client may be old enough to be the father of teenagers, but he is — in no way, shape, or form — an adult. If it pleases the court, I’d like to call into evidence the fact he wore a Warzone t-shirt to this trial,” said public defenderDavid Hankley while trying to convince the judge to try his client as a minor. “Add to that his Twitter feed, where he obsesses over ideas of ‘unity’ within a scene full of 15-year-olds, and I think the picture becomes clear.”

The judge and prosecutor, veterans of the court system, were reportedly unmoved by the motion.

“Everyone would like to take a couple years off the top, am I right?” mused charismatic, handsome prosecutor Geoffrey Brennan to the jury. “Hell, I know I would. But just because this man belongs to the Die Young Crew, and still doesn’t have his driver’s license, doesn’t mean we shouldn’t try him as what he truly is: an adult. He isn’t the first hardcore kid to try this stuff, and if we don’t send a strong message, he won’t be the last.”

In his final ruling, the honorable Judge Mike Joge struck a chastising tone with Ahmed.

“Just because you spend all your time arguing with children on these online music forums doesn’t mean you a child yourself,” Joge asserted. “I sentence you to 25 ta life.”

“I think we may need a change of venue. Maybe we could do better in a place like Portland,” said Hankley. “I mean really this is a travesty. He might be an adult, but he’s a minor at heart.”

Before Ahmed was dragged off into his holding cell, he gave a brief statement to the press.

“It’s not who I am, it’s not how I feel,” Ahmed insisted as he writhed in handcuffs. “I’m gonna stay young until I die.”