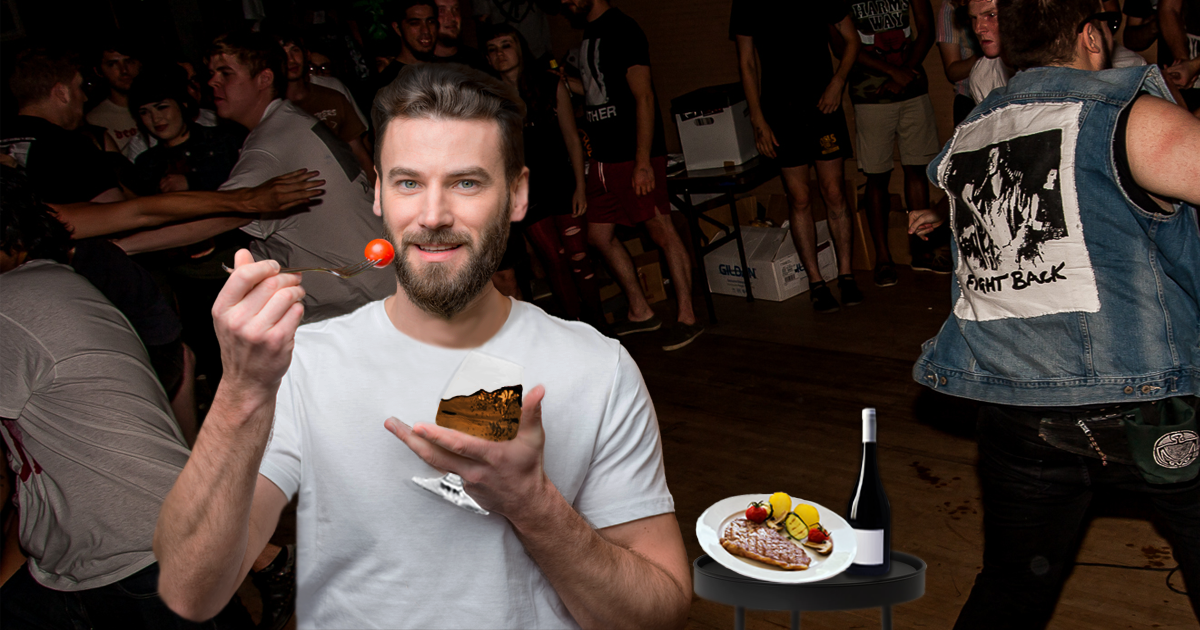 BOSTON — A legendary and possibly mythical mosher was allegedly spotted last night enjoying a four-course French meal in the pit a hardcore show without once spilling his aperitif, astonished sources confirmed.

“From up in the balcony, I see an ordinary-looking dude, casually munching on salmon mousse with toast points right in the middle of the pit,” said showgoer Cheryl Talbot. “I lost sight of him and figured my eyes were playing tricks. But then, a few songs later, there he is… eating Coq au Vin and sipping Calvados from a petite aperitif glass. He even used the correct silverware for each course. It was astounding.”

Simply called the “Moshing French Diner” by local punks, the bourgeois slamdancer has been spotted at basement shows throughout the greater Boston area, according to unsubstantiated reports.

“No one’s really sure where he gets the food. And he wears camo cargo shorts, but he can’t possibly fit salad forks, creme fraiche, and palate-cleansing sorbet in those pockets,” said local punk Ritchie Dominguez. “One time, I thought I saw a butler milling around the pit delivering his meals… but it might have just been a ska fan in a black suit.”

“The ‘Moshing French Diner’ is a myth,” Johnston said. “He’s as real as the show that starts on time, and the girl at the bar who liked my band and thought I was hot.”

“There are actually many cryptids found throughout North America’s regional punk and alt scenes,” said Sukari. “There’s the Louisiana ‘Phantom Opening Band’ that drinks all the beer and then vanishes, a Doom Metal lycanthrope in the Pacific Northwest that transforms into a vicious hellbeast if someone bumps into his girlfriend, and even a Slender Man-esque cryptid that plays ska trumpet in Baltimore.”

At press time, a group of intrepid punks, mythbusters, and paranormal investigators teamed up to search for the “Moshing French Diner,” as well as the mythical punk venue that allegedly has a clean bathroom.