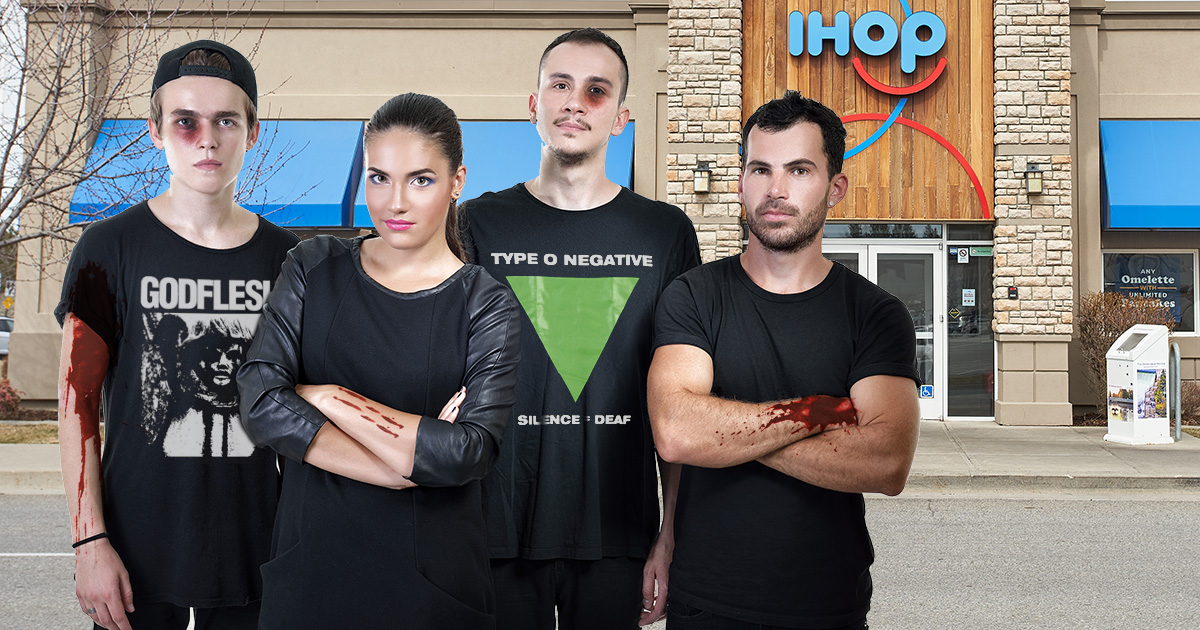 WEST LAWN, Penn. — A violent altercation in an IHOP parking lot yesterday between members of doom-metal band Savage Agnes was the closest thing the group has had to rehearsing any of their songs since March, exhausted and bloodied sources confirmed.

“We’ve been taking social distancing pretty seriously, so of course we haven’t had band practice for quite a while. We’re all making sacrifices, but none of us were willing to up our Friday night parking lot beer sessions, pandemic or no,” said guitarist “Gory” Georgie Powajski while wrapping his bleeding knuckles in a dirty Iron Maiden T-shirt. “It felt damn good to put the same energy we usually bring to our music into a brawl. Also, if you see any loose teeth lying around on the ground, those are probably mine.”

“I was going to town on my Grand Slam and I could see those long-haired folks through the window. They were all drinking and carrying on over there for a while,” recalled Nelson. “Then these kinda preppy-looking guys walked by, and one of them yelled something about a ‘Lemmy,’ I think. Then the skinny one started throwing empty beer cans at the others, and suddenly there was chaos. I will say, though, they really came together as a group to put a beat down on those preppy kids.”

“Metal fans are pack animals. Even just a couple weeks without getting 86’d from a dive bar together or rocking out with a good group headbanging session can play havoc with a metalhead’s mental state,” Gorham said. “This can be mitigated by regularly playing shitty Metallica covers together, but without that outlet, a fight is inevitable. At least now they’ve gotten it out of their systems and can go back to getting hammered in diner parking lots just like they used to. At least for a week or two.”

Witnesses report the members of Savage Agnes engaged in an awkward group hug just before sending their drummer to buy another case of Coors.