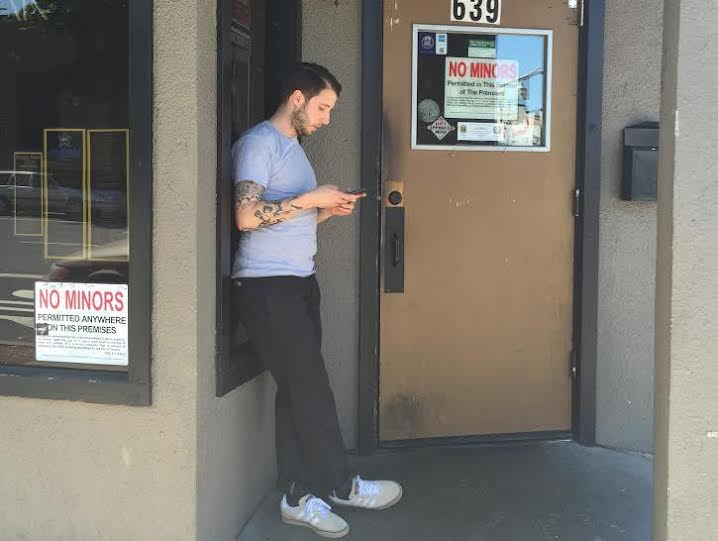 ORLEANS, Mass. – Ticket holder Nick Cascarella made a desperate attempt to appear to be busy on his phone upon arriving to a show hours before doors were scheduled to open earlier today, perplexed venue staff confirmed.

“Of course I got here early on purpose,” said Cascarella putting on an Oscar-worthy performance. “I needed to respond to some emails for work, and get a lot of things done that I couldn’t with all the distractions of home. I am so happy for this free time and that none of my friends decided to come to the show.”

Venue employees setting up for the show reported Cascarella’s charade was one of the most transparent attempts they had ever witnessed.

“I was running some trash to the dumpster when I noticed the dude, phone in hand, scratching his chin as if he was making some big decision or something,” said dishwasher Zack Martin. “But I could immediately see that the screen was asking him to put in his password.”

“I glanced over at him silently cracking up, as if he was having a funny conversation with someone, and thought to myself ‘Why the hell is he here this early? There is a mall four blocks away. Just go hang out in the air conditioning there,’” said Tomkin. “I would have invited him in to sit down and get out of the sun, but he was there alone for a reason. I don’t need him ruining my day.”

While Martin and Tomkin saw straight through the histrionics, sound guy Frank Marasco was a bit more gullible.

“When I first showed up and was talking with the door guy, I’ll admit he had me fooled for a second. I was convinced he was sending a text or at least checking his email,” said Marasco. “I thought he must be the tour manager and he was getting shit in order, then I remembered the closest thing any of these bands have to a tour manager is their bass player.”

During the opening band’s set, it was reported that Cascarella was conspicuously absent. However, it was later confirmed that he was actually charging his phone on the only empty outlet behind a stack of chairs in the back of the room.