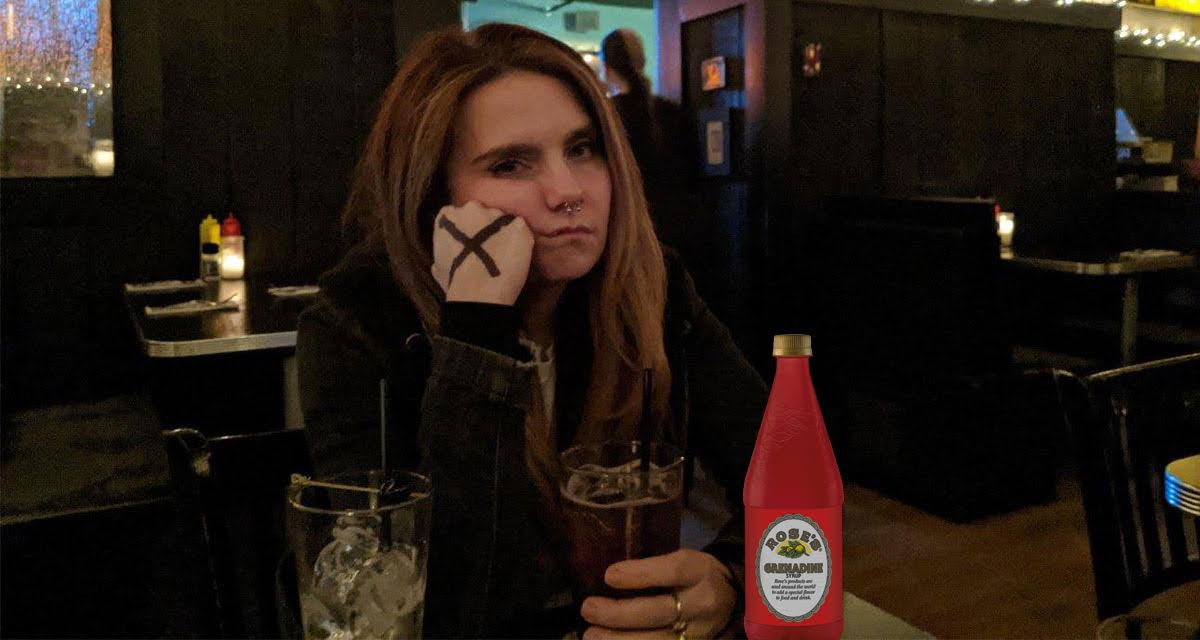 “This usually happens to me in the dead of winter, but this year feels especially tough,” explained Enders who also begged bar staff for soda fountain gun privileges. “Dating has been rough, and there aren’t too many jobs for straight edge fashion bloggers. It’s all so grim. So I just sit here at the local watering hole and crush Shirley Temples until I can feel my pancreas start to ache. Today I decided to skip the formality of ordering and made them let me pour my own. Fuck…”

Longtime bartender Sven Hagstrom admitted that this was the most pathetic scene displayed by a straight edge patron in years.

“Usually these weirdo sad sacks come in wearing a Bane hoodie or some shit like that and barely order anything,” explained a visibly frustrated Hagstrom. “But I truly thought Alana was about to break edge tonight. And as much as I love serving up creative absinthe-based drinks, I don’t want to enable her downward spiral. But now I have no idea how much to charge her — there’s no option in our cashier system for an entire bottle of our cranberry-infused grenadine.”

Other patrons expressed interest in flirting with Enders, but backpedaled upon learning of her teetotaling ways.

“Look, I don’t mind at all that she is straight edge, some of my best friends were straight edge in high school,” confessed Boston University student Stewart Marcus. “But this is Boston, not Mecca. When someone just posts up in a bar drinking Perrier or pop all night, it kinda bums everyone out. I then feel like a degenerate gulping down my third Irish Car Bomb of the evening.”

“I understand that coffee shops close around 8 p.m. but I wish they would find another place to commiserate,” protested Marcus. “Isn’t the library open at night? Go there. Or how about a nice gas station?”

Friends and loved ones are worried about Enders’ continued decline, as rumors swirled that she recently purchased a bottle of Jack Daniels’ Barbecue Sauce.