Cry for Help Getting Tons of Likes 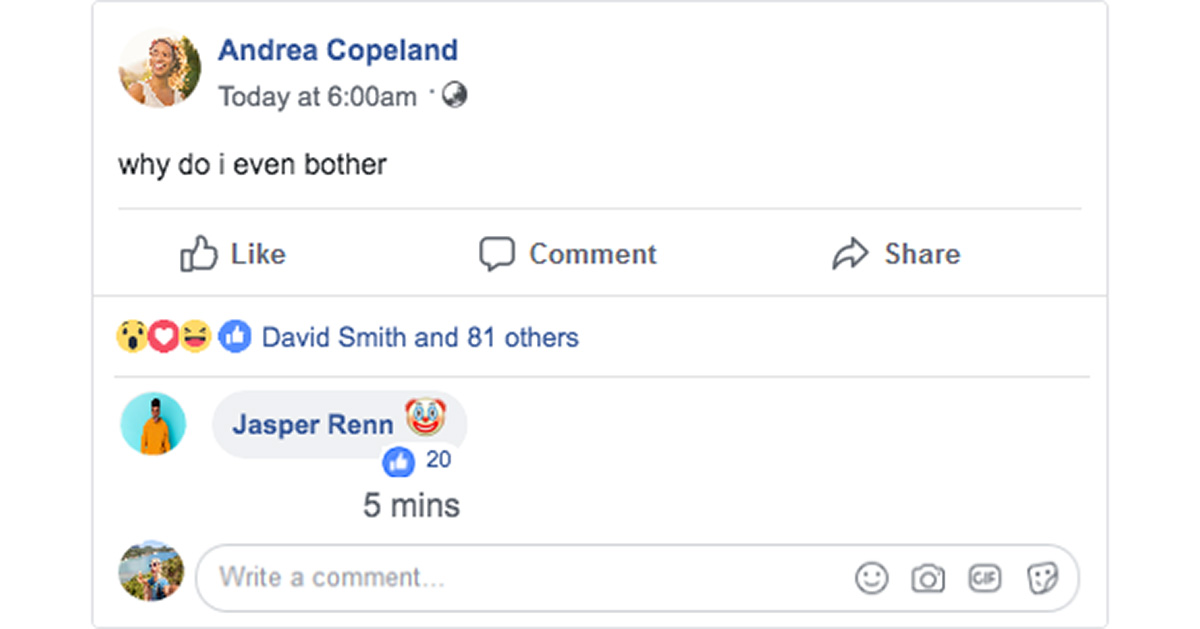 TOLEDO, Ohio — A desperate plea for help shared via Facebook post by local woman Andrea Copeland has been garnering a ton of likes, according to multiple sources who engaged with the post.

“She usually gets a couple likes. She has an aunt that comments on everything, and there’s this guy she used to make out with sometimes who always heart reacts her posts, but this seemed like it was getting way more traction more than usual,” noted Jaymee Estes, who described herself as a close friend of Copeland’s since high school. “At first, I was worried I missed her birthday or something ‘cause it was like right at the top of my newsfeed, but then I saw the post. Yikes. I mean, I hope she’s doing okay. I ‘liked’ to show my support for whatever it is she was talking about.”

The post, which features both a litany of personal grievances and more existential ponderings about the futility of even trying, along with a few thinly veiled threats of self-harm, has elicited responses from outside Copeland’s circle of acquaintances.

“I actually did the little ‘care’ react,” said John Toriano, an acquaintance of Copeland’s who said she added him on Facebook years ago after the two met on vacation. “I don’t see her post too often. I remember her saying a couple political things around the election, and sharing memes a few times, but this was definitely different. We’re not close, but we definitely met at some point, I think. You can’t not respond to something like that, you know? And what goes further than reacting on Facebook? I know she probably really appreciated it.”

Daniel Rahn, an independent analyst of social media markets, suggested that posts like Copeland’s are part of a growing trend across platforms.

“We’ve seen a marked increase in engagement with posts that express negative feelings,” said Rahn. “Whether it’s Twitter, Facebook, Instagram, or even newer apps like TikTok and Clubhouse, hopelessness, anhedonia, and despair are all really in this year, even beating out ‘hometown drama’ and closely following ‘shit-talking tirade about new partner’s ex.’ Very impressive stuff.”

At press time, the number of likes on Copeland’s post seemed to have plateaued in the mid-130s. Copeland did not respond to a request for comment.